By ArtimonySports (self media writer) | 3 months ago

Mohamed Salah scores his 131 goal for Liverpool against Brenfort giving him opportunity to be among top ten scorers in premier league. 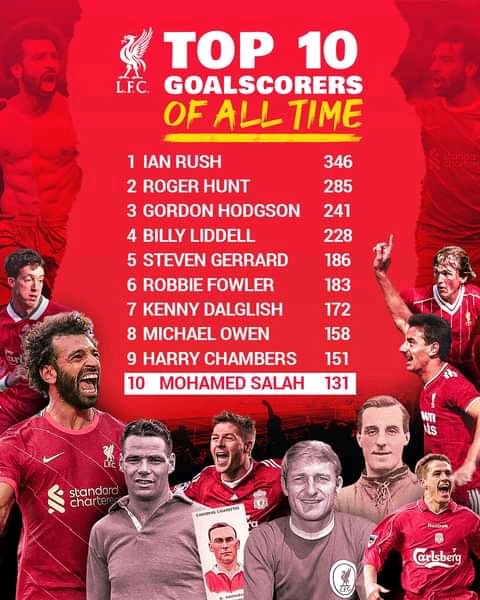 The above photo shows the summary of the top goal scorers of all time with the number of goals the scored.

Jurgen Kloop gains one point after facing stiff competition from Brentford who was promoted this summer to play EPL. Attacking of the reds was very high but wasted alot of chances but along last Salah dribble defenders and scored his 131 goal after being proved by VAR since they thought he was offside.

Last week Salah scores his 100th goal for the red devils making him being recognized as unstoppable winger with great finishing. The Eyptian is now in 10th position of all time top scorers, with Ian Rush being the first one with 346 goals. Among other players are Steven Gerrard, Michael Owen, Roger Hunt e.t.c as shown in the image above.