Today the rivalry between Tottenham and Arsenal will take a new turn when the Gunners welcome the Spurs to the Emirates for the highly-anticipated showdown. The stage is set and ready, with fans sparking all sorts of debates online to fuel the rivalry even further.

Alexander Lacazette is the one player who Arsenal fans have said should not miss the match today, even if it means benching Aubameyang. Lacazette currently has four goals against Tottenham and will be looking to adding more to his tally today if Arteta chooses to play him. Today’s match is expected to be a match to remember for the Frenchman because if he bangs a goal today, then Arsenal will be on their knees offering him a new contract. 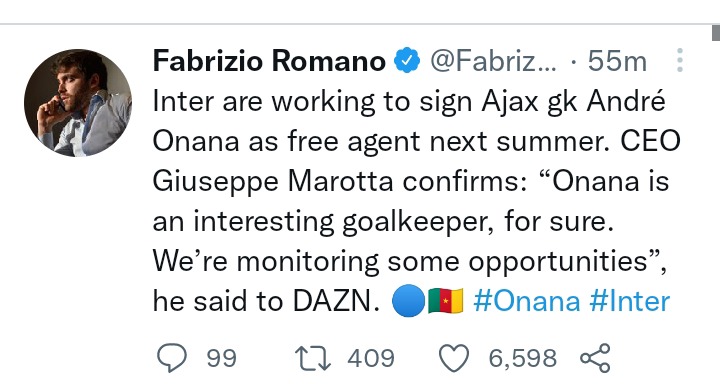 Reports have shown that AC Milan are still in the race to sign Andre Onana when his contract with Ajax expires. The Arsenal transfer target has had many suitors on his doorstep in the past couple of months but none has really appealed to him nor his current club, Ajax. AC Milan are in need of Donnarumma’s replacement and Andre Onana can much up to the quality of the Italian shot-stopper.

Arsenal however may also be in the race to sign him considering that Bernd Leno has reportedly entered the club’s transfer list. Arsenal have entrusted the number one goalkeeper title to Aaron Ramsdale and a suitable backup and competitor is needed to keep him on his toes. And who else is better for that job than Andre Onana?

Arsenal striker Eddie Nketiah is making it hard for Mikel Arteta to let him go in the transfer market. The 21-year-old showed his true colors on Wednesday, and he is currently in contention to start today’s match. In order to boost his morale, Arteta may give him some minutes on the pitch, probably as a substitute. Crystal Palace were close to signing him in the summer transfer window but negotiations broke down. Arsenal will make a last-inch effort to convince him to pen a new contract and if he refuses, then at least they will say they tried.