Thomas Müller is a German professional footballer who plays for Bundesliga club Bayern Munich and the Germany national team. He has today reacted to Chelsea's forward striker Kai Harvet'z performance in the international duty for his country Germany. Kai Harvetz is currently the top goal scorer for Germany with two goals in this international games.

"If you know of Kai he is brutally good and young talented player" says Muller according to the England Sky Sport News today morning. 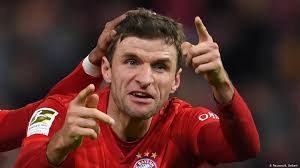 "Harvetz is a great talented player, a lot is expected to come out of him. He will be the German's main central striker after Roberto Lewandoski" says Muller according to the German Sky Sport News today morning.

The German coach decided to play Kai Harvetz, Thomas Müller and Roberto in the striking role. Muller claimed that Lewandoski provides the experience forward while Harvetz challenges the defenders. Kai Harvetz joined Chelsea last season after completing his permanent move from Bayer Leverkusen with a transfer fee of around seventy million paunds.

"The boy has performed well in the international duty and has scored twice, Harvetz is great and he will be a greater player in the near future" Muller added.

Harvetz has adopted Chelsea's playing style after conquering his frustration under Frank Lampard. Frank Lampard didn't provide enough playing time to the German star to prove himself and this cause Harvetz to get frustrated. He played a very crucial role in Champions League final against Manchester City at Instabul where Harvetz scored a leading goal for the Blues.