The FKF is reinstated by sports commissioner CS Namwamba.

By KaneH (self media writer) | 2 months ago 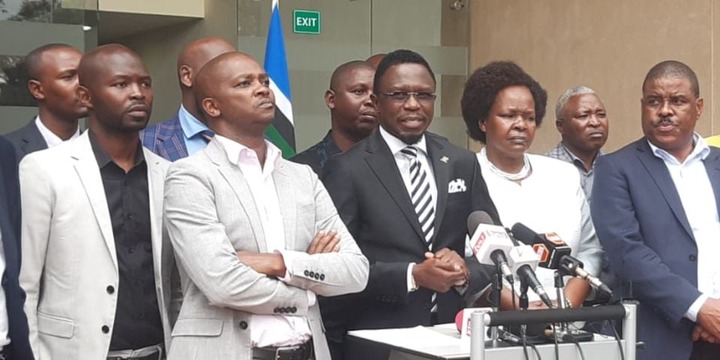 In accordance with Fifa's demands that the suspension be withdrawn, Sports Cabinet Secretary Ababu Namwamba reinstated the National Executive Committee and Secretariat of the dissolved Football Kenya Federation on Friday.

As punishment for government intervention, Kenya has been barred from all football-related activities for an extended period of time by the world football governing body Fifa since February 24 of this year.

In a joint press conference with the FKF NEC members, which was presided over by President Nick Mwendwa, Namwamba asserted that football is too essential to be jeopardized by personal agendas.

He continued by saying that many sacrifices were made by everyone involved in reaching the conclusion.

"While demanding the return of football, we must not ignore morality, the rule of law, or sound government. I have been completely open and honest with the suspended NEC about these issues during our discussion "said Namwamba.

"We have reached an agreement, which I shall discuss in three sections. The administration has vowed to adhere to the demands stated by Fifa in order to have the suspension lifted."

"FKF will inform Fifa of the agreement reached between them and the government about the requirements that we have established. They have been dispatched to FIfa and have been put down by the FKF, according to Namwamba, who replaced Amina Mohamed last week on Friday.

The state and FKF have an understanding that Mwendwa will refrain from entering the federation until he has a chance to defend himself in court.

"Mwendwa has admitted that he needs to handle his court issue. The team captained by Barry (Otieno) and Doris (Petra) will dominate national football in the interim.

"We anticipate that Fifa will react quickly to the communication that will be made available to them following this press conference.

Content created and supplied by: KaneH (via Opera News )