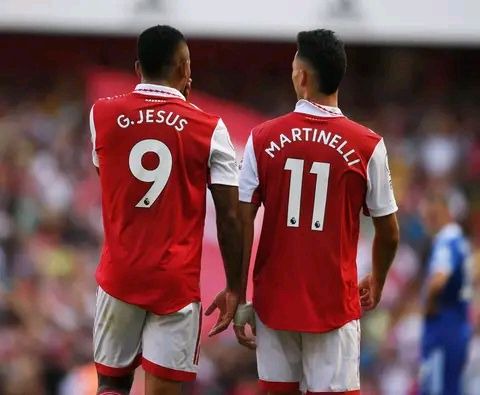 Arsenal have only played two matches this season and already scored six goals. That is an average of three goals per game. This show how Arsenal have improve in term of their attacks and team performance generally.

Last season most of the Arsenal attacks were from the right wing where Bukayo Saka normally plays. This was quite predictable by many team who would then put more of their concentration in that area.

Arsenal could find it hard when Saka is block by the opposition defenders. Arsenal manager seemed to had realised that and he addressed that problem to the best of his knowledge.

Arteta brought in a center foward in the form of Gabriel Jesus from Manchester City. Arteta did his analysis and came into conclusion that Jesus was the only missing link in his attack.

Gabriel Jesus played under Mikel Arteta when Arteta was the assistant of Pep Guardiola at Manchester City. The two hard known each other very well during their time together at Manchester city.

This could be the reason Gabriel Jesus left Manchester city a team used to winning trophies every season and joined Arsenal rejecting other teams like Chelsea who were even offering him champions League football.

Jesus has had a great effect in the Arsenal team. He has relieved Bukayo saka from more of the attacking duties as the team can now score even without Bukayo's involvement.

Jesus presence in the Arsenal team makes it hard for the opposition defender to defend against Arsenal team because of his style of play.

Gabriel Jesus is a type of striker who doesn't stick as a number nine as he normally drop into the midfield to collect the ball and initiate attacks. This leave the opposition defenders confused on who to mark among the Arsenal attackers.By doing this, it creates room for other Arsenal attackers to score goals.

Arsenal attack will even be better than how it is now once their new signing Fabio Viera is introduced to the team. Viera is an attacking midfielder who will share the creativity work load with Ordegaard. This will make theit attack more lethal than it is now.