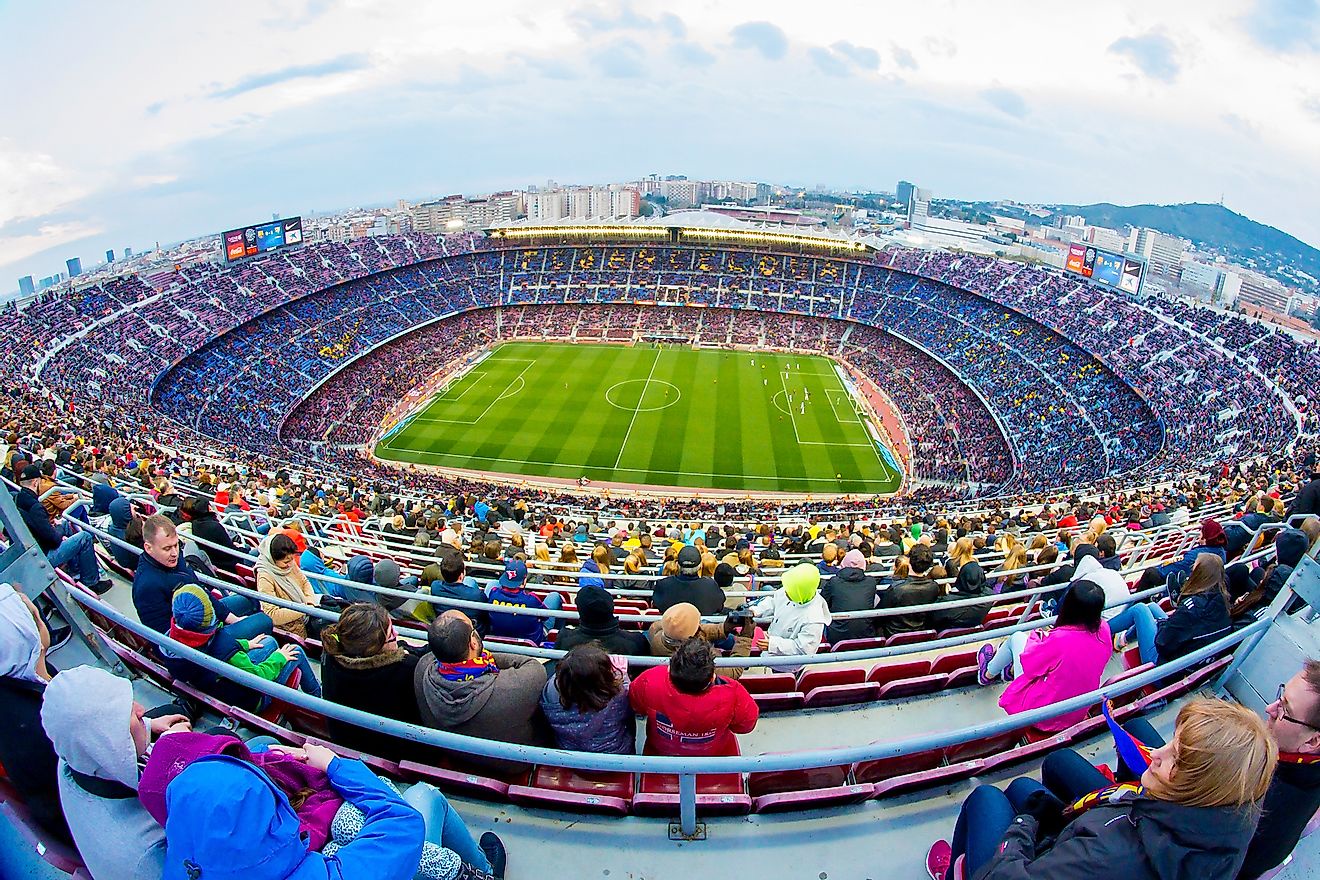 Europeans love their sports. Even since the times of the ancient Greeks and Romans, people in Europe have packed large stadiums in order to attend major sporting events. Today, Europe’s largest sports stadiums can hold capacity crowds of up to nearly 100,000 spectators. Most of these venues are regularly used for football (soccer), as it is Europe’s most popular sport. Some, however, have also been used for other major sporting events, including the Olympics. Here are ten of Europe’s largest sports stadiums by capacity. 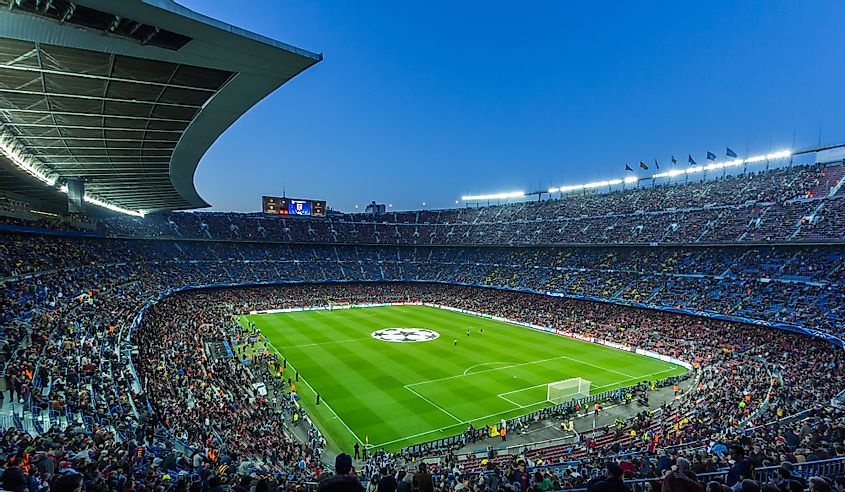 Camp Nou is Europe’s largest sports stadium by capacity. It is located in Barcelona, the capital of the Spanish region of Catalonia. The venue can seat up to 99,354 people. It was first built in 1954, and opened three years later. Renovations to the stadium took place in 1995 and 2008. Further renovations, scheduled to be completed in 2022, are now being undertaken to increase the capacity of the stadium to 105,000. Camp Nou is home to one of Europe’s most popular football teams, FC Barcelona. Events that have been hosted at the stadium include five matches of the 1982 FIFA World Cup, the 1992 Summer Olympics, two UEFA Champions League finals, and five UEFA Super Cup finals. 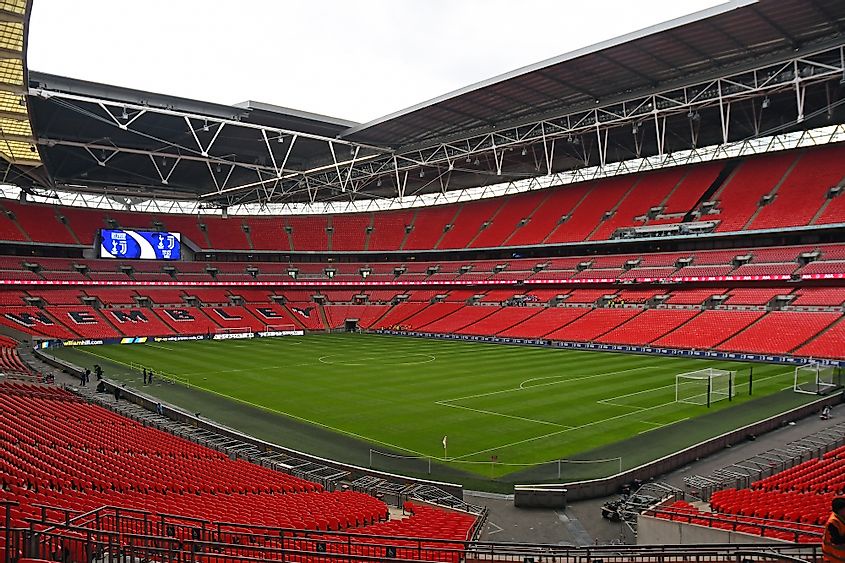 With a capacity of 90,000, Wembley Stadium is located in London, England. The current venue is actually a successor to the original stadium of the same name, which was completely demolished in 2003. The new stadium was opened in 2007. One distinct feature of Wembley is its roof, known as the Wembley Archway. It is the world’s longest unsupported roof. Wembley Stadium regularly hosts the football matches of England’s national football team. It also hosted UEFA Champions League finals in 2011 and 2013, as well as the gold medal football match of the 2012 Summer Olympics. 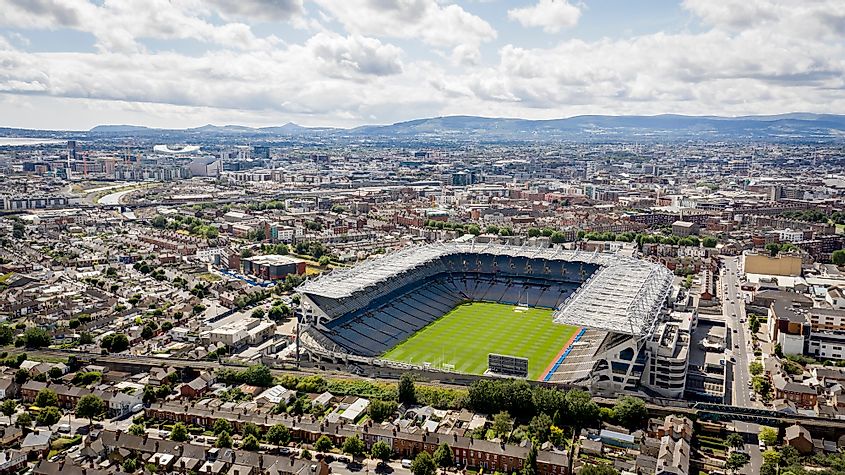 Croke Park, Europe’s third largest sports stadium, is located in Dublin, the capital of Ireland, and has a capacity of 82,300. The venue has hosted sporting events since 1880. The Irish national football and rugby teams play their home matches in Croke Park. In 1961, the stadium hosted its biggest ever crowd when 90,556 fans packed the venue to watch the All-Ireland football final. 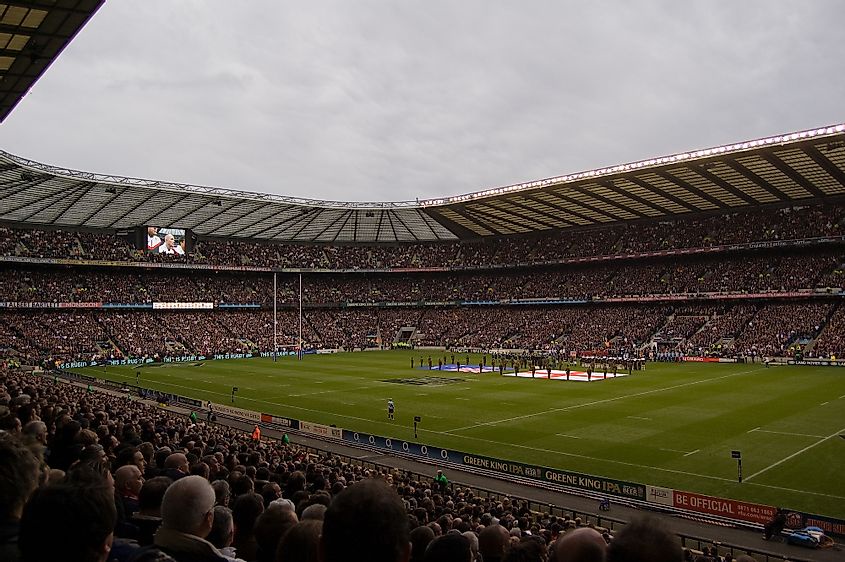 Twickenham Stadium is located in southwest London, and is considered the fourth largest sports stadium in Europe, with a capacity of 82,000. The venue was first opened in 1907. Between 1990 and 2008, the stadium underwent renovations to add additional seating capacity. Unlike other stadiums on this list, Twickenham was not designed for football, but for rugby. It is owned by the Rugby Football Union, and hosts the games played by England’s national rugby squad. The stadium is also home to the World Rugby Museum. 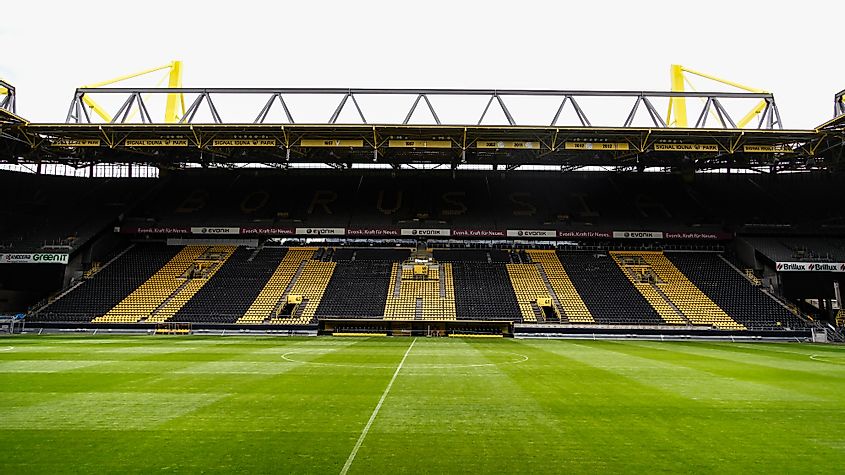 Signal Iduna Park is located in Dortmund City, Germany. It is the biggest stadium in the country and the fifth largest in Europe, with a capacity of 81,365. Like other stadiums on this list, the Signal Iduna Park has hosted several important football matches, including games during the 1974 and 2006 FIFA World Cup, and the 2001 UEFA Cup Final. Nicknamed “The Yellow Wall” by its attendees, the stadium is also home to one of Germany’s foremost football clubs, Borussia Dortmund. 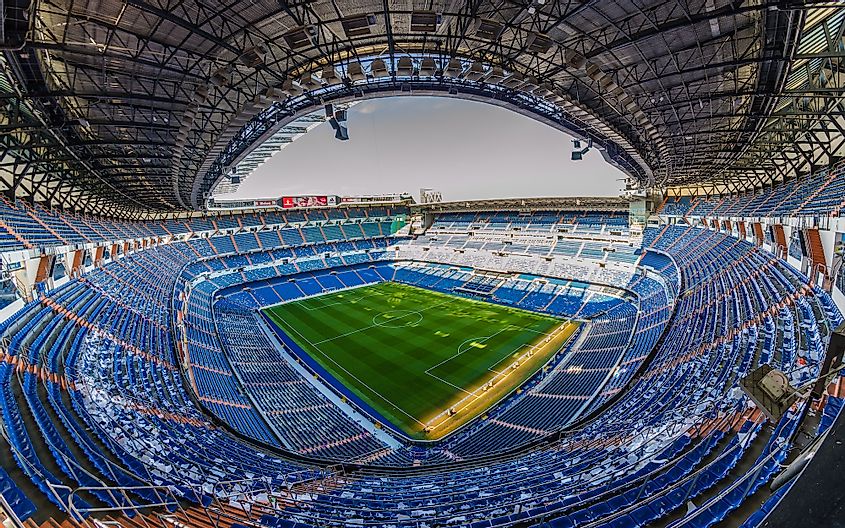 Located in Madrid, the capital of Spain, Santiago Barnabeu Stadium has a capacity of 81,044, making it the second largest stadium in Spain and the sixth largest in Europe. The venue is the home of one of Europe’s premier football clubs, Real Madrid. It was built in the years 1944-47, and renovated twice in 1982 and 2001. The stadium has played host to four UEFA Champions League Finals in 1957, 1969, 1980, and 2010. In 1982, it hosted games during the FIFA World Cup. 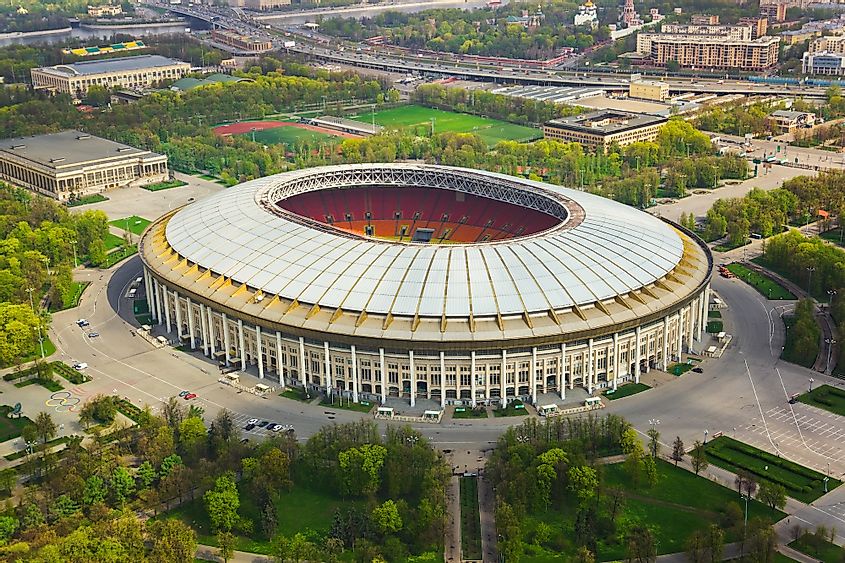 Welcome to the largest stadium in Russia, located in the country’s capital, Moscow. The Luzhniki Stadium, which has a capacity of 81,000, was built during the Soviet era in 1956. It was originally named the Central Lenin Stadium, but adopted its current name in 1992, following the collapse of the Soviet Union. In 1980, the stadium hosted the Summer Olympics. It also hosted the UEFA Cup final in 1999, and the UEFA Champions League final in 2008. In 2018, the stadium hosted the FIFA World Cup. 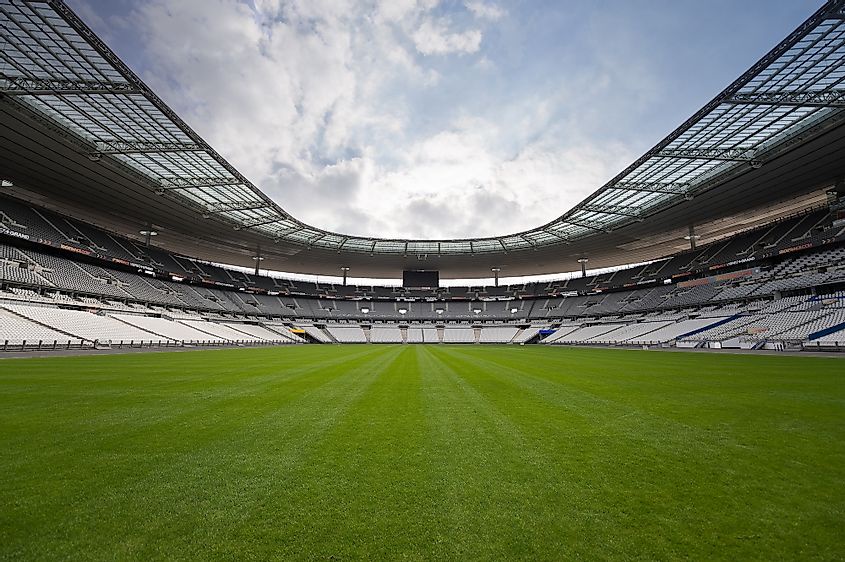 The Stade de France has a capacity of 80,698, making it the largest stadium in France and the eighth largest stadium in Europe. It was built in 1995, but not opened until 1998. The venue is the home of France’s national football and rugby teams. Located just a few kilometers north of Paris, the Stade de France’s first-ever sporting event was the final game of the 1998 FIFA World Cup. 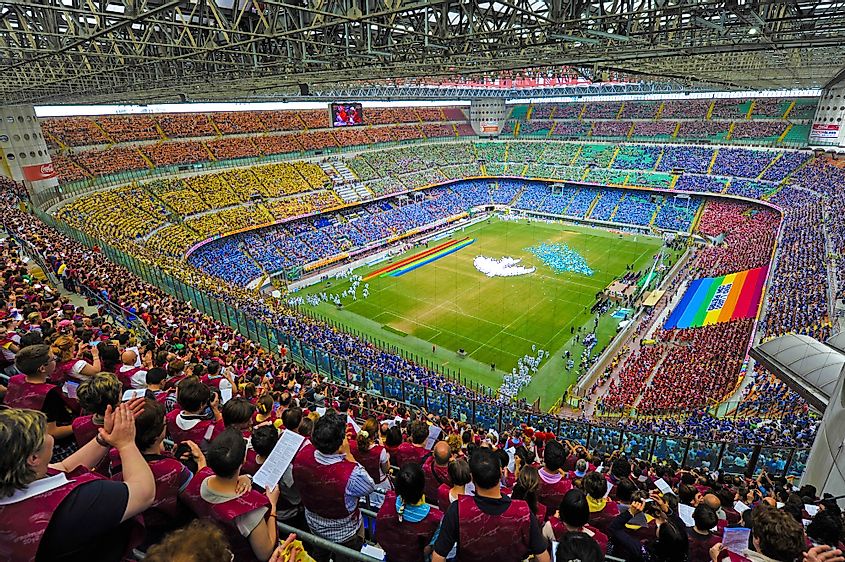 Italy’s largest stadium and Europe’s ninth largest is officially known as Giuseppe Meazza Stadium, and is located in the city of Milan in the north of the country. The name San Siro denotes the district of Milan in which it is based. The venue is home to two premier Italian football clubs, AC Milan and Inter Milan. Built in 1926, the stadium has a capacity of 80,018. San Siro hosted football matches as part of the 1990 FIFA World Cup, as well as four UEFA Champions League finals in 1965, 1970, 2001, and 2016. 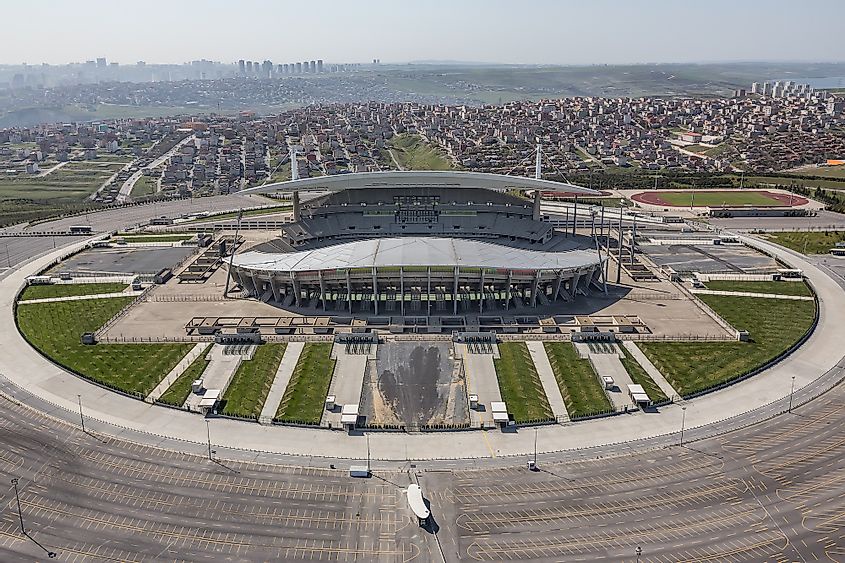 Named for the founder of modern Turkey, Europe’s tenth largest sports stadium is located in Istanbul. It has a capacity of 76,092. Construction on the venue began in 1999 and ended in 2002. The stadium was originally built as part of Turkey’s bid to host the 2008 Summer Olympics, but the bid was rejected in favor of China. Nevertheless, Ataturk Olympic Stadium has hosted football matches featuring major Turkish football clubs, and has also played host to matches played by the country’s national football squad.