Instead of kneeling, the Spaniard stands and points to the silkscreen on his manga in which you can read "No Room For Racism" in the case of the Premier League and "No To Racism (No To Racism) "in Champions

Kovacic, kneeling against racism before a match"/>

Lukaku and Kovacic, kneeling against racism before a match EDDIE KEOGH

Unlike his Chelsea teammates , this season  Marcos Alonso (30 years old) has not been kneeling against racism before games and the Madrid left-back wanted to explain on the English club's channels why he refused and how choose to support equality.

"I am totally against racism and any kind of discrimination. I simply prefer to put my finger where it says" No To Racism", is is done in other sports and in other countries. I prefer to do it that way and, of course , to say very clearly that I am against racism and I respect everyone, "said the 'blue' footballer.

"I am totally against racism and any kind of discrimination. I prefer to put my finger where it says 'No To Racism'"

Instead of kneeling, the former Fiorentina remains standing and points to the silkscreen on his sleeve that reads "No Room For Racism" in the case of the Premier League and " No To Racism "in Champions .

"I just prefer to do it this way, it is my way of doing it. Maybe he is losing some strength the other way kneeling so I prefer to do it like this and show that I fully support the fight against racism," Alonso added .

Unlike last season, in which the first option for Chelsea's left-handed lane seemed to be England's Ben Chilwell, Marcos Alonso is being immovable in the schemes of Thomas Tuchel . The three times absolute international for Spain has started in the seven official matches that the current European champions have played - five in the Premier League, one in the Champions League and the final of the European Super Cup -, scoring a free-kick in the opening day against Crystal Palace . 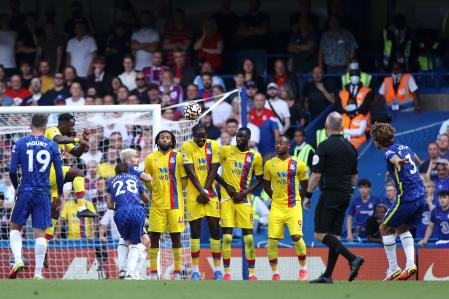 Marcos Alonso scored the first 'blue' goal of the course in Premier.