By WekesaBasil (self media writer) | 9 months ago 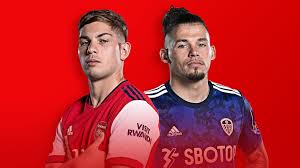 Arsenal are unbeaten in their last three Premier League fixtures and will be looking forward to secure a win against Leeds tomorrow at the Emirates. The following is Arsenal and Leeds United Team News.

Ben White was absent during Arsenal's 2-1 win over West Ham due to hamstring injury. The England International however is expected to make a return for his side during tomorrow's fixture against Leeds United.

Takehiro Tomiyasu was also replaced by Soares later in the second half with cramp. Tomiyasu is also set to be for for tomorrow's home clash against Leeds United. Thomas Partey and Kieran Tierney are still out and could not feature for the remainder of the season.

Ramsdale to start on goal. Tomiyasu, Holding, Gabriel and Tavares to form the backline. Xhaka and Elneny to pair at midfield while Saka, Odegaard, Martinelli and Nketiah to play in the final third.

Stuart Dallas will miss tomorrow's trip to the Emirates after he sustained a femoral fracture in their 4-0 loss against Manchester City. Adam Forshaw, Crysencio Summerville and Tyler Roberts are also unavailable through injury.

Meslier to start on goal. Ayling, Koch, Cooper and Firpo to form the back four. Klich and Phillips to play at midfield while Raphinha, Rodrigo, Harrison and James to lead the attack.