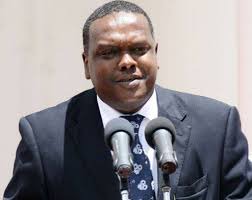 Wednesday September 16 will go down the annals of history as a day when corruption suffered a big blow in kenyan soil.

Kenyans couldn't believe when a former cabinet secretary who is currently an ambassador was found guilty of misappropriation of tax payers money.

Hasan Wario was a sitting CS for sports when team Kenya represented the country in Rio Olympics.

Wario and Soi who was then the chief de camp in charge of team Kenya visited alot of suffering to the athletes while they themselves ate with a big spoon while in Brazil.

Athletes who spoke to the Standard in 2016, revealed how they were Mistreated right from the Preparations at home whereby their allowances would delay for so long.

While at Rio, the Athletes would sleep in the most insecure areas where mosquitoes were a menace.

At one point, after the closure of the village at 10am, Kenyan Athletes were forced to spend in a bus until 4pm without lunch untill Soi came back and was informed that the Athletes had refused to leave the bus.

After realizing that Korir was still inside having planned to travel back home earlier, Soi then would contemptuously ask "kwani hii kamtu bado kako hapa"? Which loosely translates "you mean this person is still here'?

According to the team manager Wesley Korir who was at the same time MP for cheranganyi, things could have been worse were it not that he was there.

Korir revealed to the Standard how athletes feared Soi so much. Nothing could be done without him as he literally ran the show alone.

"If you asked anybody they said they don't know, if you told them to go and ask Soi, they were afraid of him" Korir said.

Korir's allegations aggainst the officials were backed by boxer Rayton okwiri who described vividly the poor state of accommodation while at Rio as top officials enjoyed life using Athletes' money.

"We went through a lot of suffering after the closure of Olympic village, we were taken to a an insecure and mosquito infested town. It was just like a gheto not befitting our status" said okwiri.

Having been found guilty, both Wario and Soi were slapped with fines or jail terms. The CS however was lucky to pay his fine of ksh 3.6 million while Soi is yet to raise his or spend ten years in jail.

Indeed no crime is perfect and the wheels of justice have started turning in Kenya. This should serve as a warning to other state Officers who are fond of dipping their fingers into public coffers as innocent Kenyabs suffer.

Do you think our courts and the director of public prosecution are now doing a good job? Feel free to share your thoughts and comments on this on our comments platform.

"From Kayole To The World Bank" David Wachira Say's.