Here are rediculous Premier League photos of the decade, along with a little bit about just what makes them so rediculous; 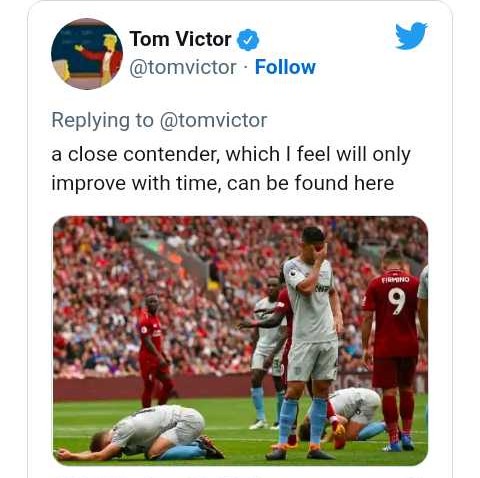 The scene is something from a war movie: bodies strewn on the ground, Roberto Firmino with his head bowed as he turns away, Naby Keita and Michail Antonio gazing off into the middle distance, Fabián Balbuena with his hand in front of his face, literally unable to look.

The reason? Mark Noble and Jack Wilshere have each, within seconds of one another, taken a football to the cr 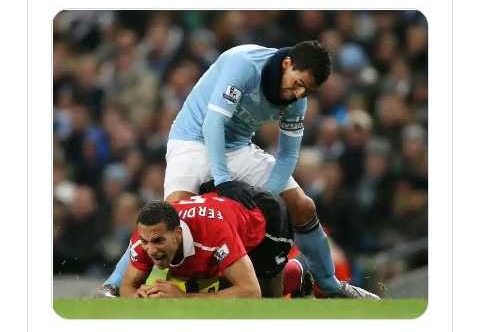 The expression on Rio’s face is one of sheer terror, as if he’s stared into the hellmouth and seen horrible, unrepeatable things.

Tevez, meanwhile, looks determined, a man on a mission. He knows the cameras are there, but there is no shame in his actions. He has seen what needs to be done, and he is doing.

Look, we all know what this looks like – there’s absolutely no mistakingTevez has pressed the button for a can of coke in a vending machine and it’s got lodged in the middle section, so he’s reaching in to get what he paid. 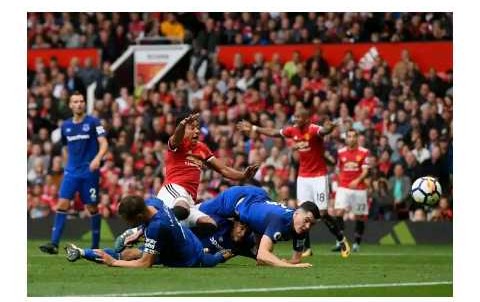 This would be both the easiest and most difficult ‘spot the ball’ challenge, all at once. From Ashley Young’s vocal appeal to Morgan Schneiderlin’s curious glance (we’ll ignore Henrikh Mkhitaryan, who could well just be staring at his reflection in the back of Young’s head), it’s easy to see where the activity of certain aspects of the photo suggest control: Jesse Lingard’s boot suggests a deliberate connection with the ball, while Phil Jagielka has captured a sensible brace motion and Michael Keane’s facial expression is nothing if not deliberately.

However, no two aspects of one player’s expressions or movement – either alone or relative to others – can be easily explained. Certainly not that of Ashley Williams, who appears to just be a disembodied human.

A metaphor for Everton’s defending in the five years since David Moyes’ departure? Almost certainly.

4. Yakubu struggling to catch up with a chicken 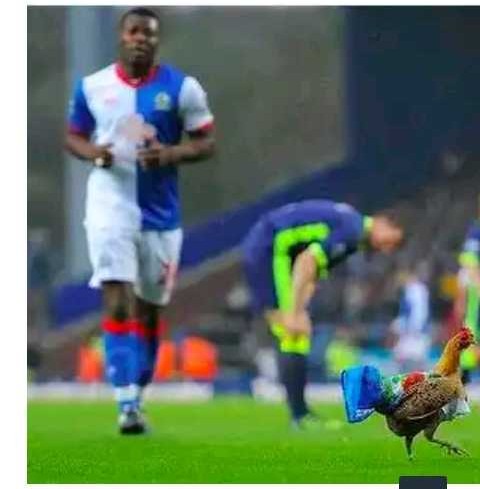 There are a few combinations of words which only exist alongside one another when something has gone very wrong. One of these combinations is “protest chicken."

Blackburn fans sent a chicken onto the Ewood Park pitch, spurred on by anger at owners and poultry magnates Venky’s, because 2012 was a much simpler time. In fact, it’s probably one of the few things to have happened that year which still stands up to how bizarre the world has become since.

If you were to pick one player to chase down any animal – human, chicken, tortoise, whatever – it would not be Yak.

The Nigerian striker was the sort of player who would always be in the right place at the right time purely so he could avoid moving too much, and yet he seems to have the puffed-out cheeks of a man whose response to being forced to capture a chicken is “oh man, not this again.

A few seconds later [spoilers], the bird was gathered by a combination of Yakubu and opposing goalkeeper Ali Al-Habsi, who you feel had an unfair advantage by using gloves.in”.ubu.nce.cken”.ckenead.ate.on is.dershat?for. it. it.ngs.nandtch.ook. years since David Moyes’ departure? Almost certainly.