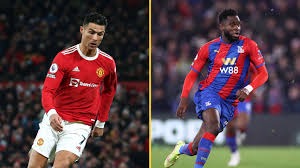 Crystal Palace will host Manchester United for the final game of the season at Selhurst Park. Manchester United new boss Erik Ten Hag will watch United's game tomorrow from the stands and will be hoping to see his side pick all three points.

Guaita to start on goal. Clyne, Andersen, Kouyate and Mitchell to form the back four. Gallagher, Milivojevic and Eze to play at midfield while Ayew, Mateta and Zaha will lead the attack.

United will be without Jadon Sancho and Phil Jones while traveling to Selhurst Park. Cristiano Ronaldo is a doubt with a hip injury. Marcus Rashford has recovered from bronchitis and might find himself in the starting XI. Eric Bailly is a doubt a back discomfort while Paul Pogba is out with a calf problem.

De Gea to start on goal. Dalot, Maguire, Varane and Telles to form United's backline. Fred, McTominay and Matic to play at midfield while Elanga, Fernandes and Rashford will play in the final third.