Premier League side Manchester United have been in the battle for several players since the re-opening of this summer transfer window, but instead there efforts have not been enough to finalize any deal despite losing some linked players i.e Darwin Nunez to opposition Suitors Liverpool, Losing Yves Bissouma to Tottenham Hotspur, Kalvin Phillips to Manchester city and Nuno Mendez to PSG. And these were the speculations put behind Christiano Ronaldo's anger towards leaving Manchester United but finally he has decided on where to spend the upcoming 2022/23 season. Despite heavily mounting speculations linking him with a possible move to both David Beckham's MLS side Inter Miami, Bundesliga side Bayern Munich and now Chelsea, the Red devil's 2022 season top scorer is at the theatre of dreams to stay ahead of the upcoming season, since he wants to help the team regain its superiority together with the new club coach Erik Ten Hag.

Also as supported by Sports outlet Four-four-two and Daily star, Ronaldo has snubbed Inter Miami to stay at Manchester United. 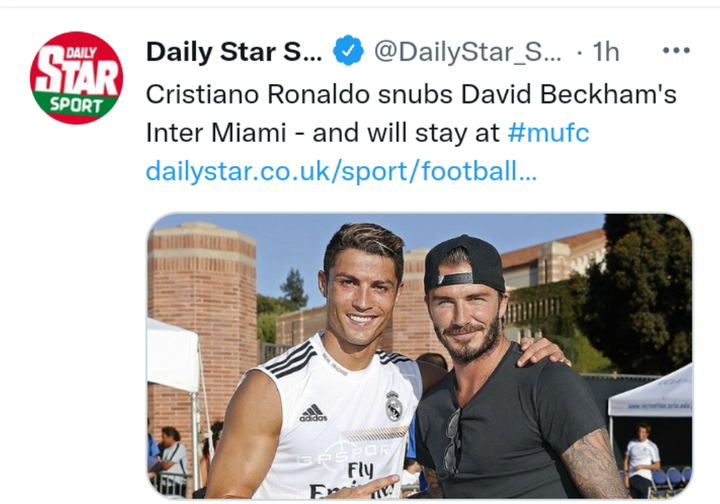 This new updates comes only days later after Chelsea new owner Todd Boehly met with Ronaldo's super agent Jorge Mendes, only to be informed that United are not willing to sell the 37 years old Portuguese International this summer. It's a massive relief for Ten Hag especially on this tying times that transfer window is not friendly for the club.