One signing that will make Arsenal first xi unstoppable next season.

By Mchina254.QuickNews (self media writer) | 2 months ago

You never realizes what you have until you lose it, Mikel Arteta made a huge mistake by letting the Gabon striker Pierre Emerick Aubameyang leave the club on a free transfer despite his contract remains 1 year in Arsenal.

Interestingly, Arsenal are struggling in the English Premier league , in recent past few weeks Arsenal have suffered a huge defeat by small clubs and this has given Tottenham Hotspur a chance to overtake them to top four race.

On the other hand Pierre Emerick Aubameyang is helping Barcelona keep their title home alive. In fact, he has netted 8 times for Barcelona since joining them January this year.

Arsenal are currently in need of a striker, If they make it to UEFA champions league next season they will attract more profiled super striker to Emirates.

Alexander Isak is a Swedish professional footballer who play as a forward in Laliga's club Real Sociedad and Sweden national team.

Arsenal possible predicted starting xi that will be unstoppable next season. 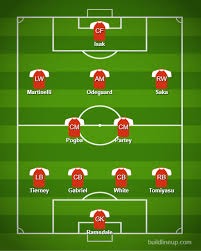 It will all determine whether they qualify for UEFA champions league next season.

Content created and supplied by: Mchina254.QuickNews (via Opera News )