Pure Today's Football Slip That Will Gift You Big Cash With BTTS and Over 2.5 Goals

Strasbourg and Olympique Marseille take on each other at Stade de la Meinau in what is expected to be one of the most entertaining games of Sunday’s program. Le Racing aim to build on back-to-back wins over Bordeaux and Nice, and they are likely to stick to their attacking style of play. You should know that Strasbourg managed to find the net in each of their last six league fixtures.

A man to watch in the home team will be Ludovic Ajorque, who has found his goal-scoring touch of late, while both Maxime Le Marchand and Lebo Mothiba are sidelined with injuries. OM, on the other hand, aim to bounce back from a 2-1 loss to Brest. Marseille are eyeing their third consecutive win on the road, and, taking everything into account, we believe that there is a big value in betting on both teams to score. Jorge Sampaoli should have a full squad to choose from. 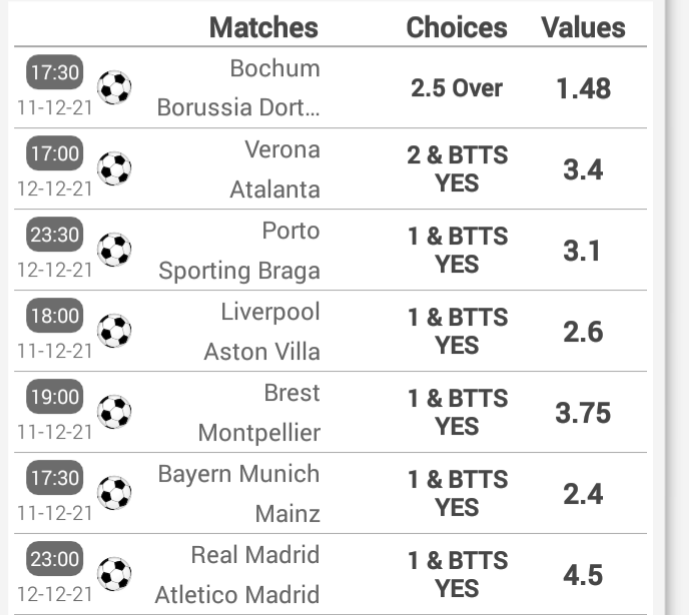 There will be fireworks when PSG and Monaco go head to head at Parc des Princes in the Ligue 1 round 18. Les Parisiens came from behind to share the spoils with Lens at the weekend, with the team retaining top position in the standings. All Neymar, Julian Draxler, Ander Herrera, and Sergio Ramos miss out with injuries, but both Presnel Kimpembe and Colin Dagba should be fit for the match. Kylian Mbappe returns to the starting XI after coming as a substitute in the 1-1 draw with Lens.

Les Rouges et Blancs, on the other hand, rolled over Metz 4-0 in their last league match. Monaco have find their best form of late, and we predict that they are capable of holding PSG to a draw in the “City of Lights”. All Cesc Fabregas, Krepin Diatta, and Benoit Badiashile are sidelined with injuries for the visiting team.

Arouca will look to make amends for a 2-1 loss to Santa Clara when they welcome Vizela to their Estadio Municipal de Arouca on Matchday 14. Arouca remained in the 9th position in the standings despite the loss, but they are only three points clear of the relegation zone. Midfielder Pedro Moreira, who suffered an injury in the last league match, is unlikely to feature against Vizela.

Alvaro Pacheco’s troops, on the other hand, were not in action at the weekend as their encounter with Belenenses was postponed. Vizela are eager to put an end to their ten-game winless run, but they are surely capable of holding Arouca to a draw. In their last meeting in a competitive match the two teams played out a 1-1 draw, and we predict that the history is going to repeat itself.

Warning Signs Of Stroke In Men And Women