Lesnar vs. Reigns To Be 'Winner Take All Championship' In WWE At WrestleMania

By @soloh_kiige (self media writer) | 6 months ago 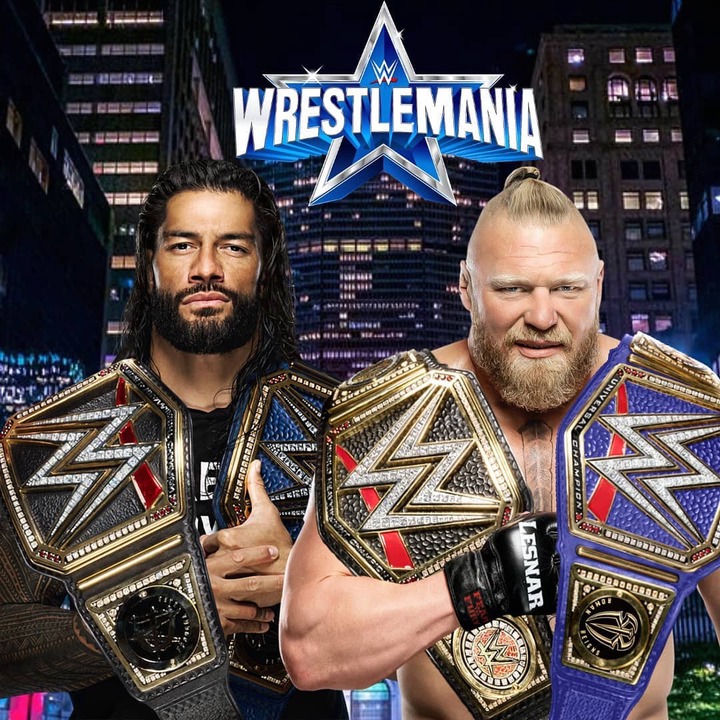 Tables have been laid out. Brock Lesnar, the winner of the 2022 Royal Rumble and current WWE Champion, has decided to face Roman Reigns in The Greatest WrestleMania Match Ever. An eagerly anticipated Championship Unification Match will take place at WrestleMania on Sunday night.

Due to a positive test result for COVID-19, Roman Reigns was unable to defend his Universal Championship at WWE Day 1 against Brock Lesnar as originally planned. After being dismissed by Reigns just days earlier, Paul Heyman stepped back in as Lesnar's advocate and fought to have his client included in the Day 1WWE Title Fatal 4-Way Match instead. Heyman had previously been sacked by Reigns. Heyman's sleight of hand allowed The Beast to reclaim the WWE Championship.

Bobby Lashley was able to recover the WWE Championship from Brock Lesnar at the Royal Rumble after a surprise appearance by Reigns and a helping hand from the treacherous Heyman during Lesnar's defense of the belt.Rather than wait for Lesnar's reaction, the WWE Universe wouldn't have to wait. That following night, the Beast rushed the ring as an unexpected entry in the Royal Rumble and dominated the competition.

The next night on Raw, Lesnar made his debut and opted to go to battle with the Universal Champion, having earned the right to challenge anybody he wanted. Now Reigns may finally face The Conqueror on the World's Most Important Stage!

You won't want to miss the winner TAKES ALL Match, which starts at 8 p.m. ET/5 p.m. PT on Peacock in the U. S. and at the same time and place on WWE Network across the globe on Sunday, April 3.

Content created and supplied by: @soloh_kiige (via Opera News )