Opinion: Are These The Most Brutal World Class Footballers In The World?

By KokiNews (self meida writer) | 14 days

Over the years, there's been a select few hard men who have gone above and beyond for their sides, turning their rugged style of play into a trademark, taking one for the team in the booking department and giving their sides some real edge against their opponents. 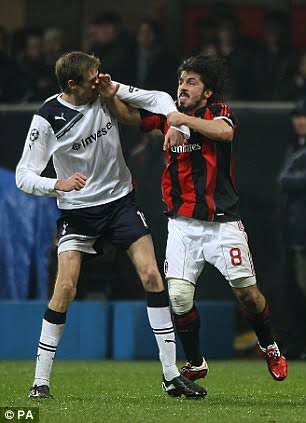 Let's take look at four of the toughest footballers to have ever graced the pitch.

Ibrahimovic is famous for having a short temper. Even in his early career, he had a fight with a teammate during training, and the teammate's father wanted to expel him from the team.After that, he has been involved in several other violent incidents with teammates as well as his opponents.

He was nicknamed "Psycho" or "Killer" due to his style of playing. Materazzi was a hard tackler, and a physical, brutal, pricked player. He was also known for his tight marking of opponents.

Diego Costa is known for having a bad temper and lashing out at other players, resulting in several charges for violent conduct, many for stamping on opponents. Costa appears to engage in psychological warfare during games, in which he attempts to create the confrontations he is involved in.

Sergio Ramos has had a long and distinguished career as Real Madrid's most dirty player. At the time of writing this entry, Ramos has 26 red cards and holds the La Liga record. With a couple of years to go before he retires, that number could rise even higher. Ramos is a notoriously hard-tackling defender with a nasty temper and a penchant for kicking and elbowing his opponents.