Ronaldo was replaced by Marcus in the 71st minute and could be seen demanding to know why he had been taken off with United 2-0 up. 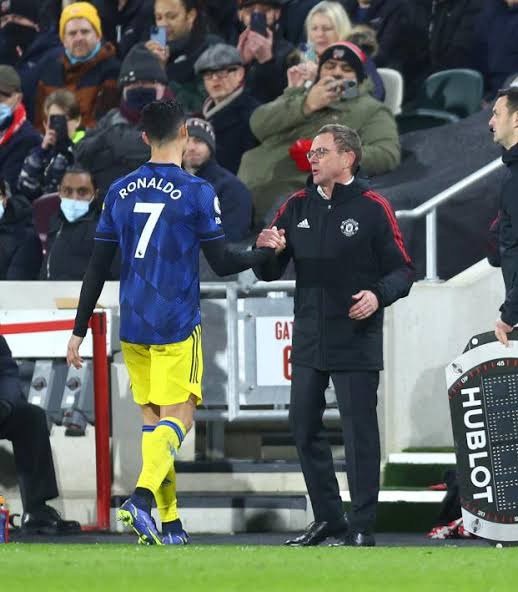 It is not the first time this season that Cristiano's ego has appeared to override team considerations.

Portugal star returned from injury to start in United's victory over Brentford, though he appeared visibility angry after being substituted and was later seen to be talking it out with boss Ralf.

Ronaldo continued to show his displeasure as he passed his boss and threw his jacket down before sitting in the dugout, later being seen asking why it was him to be subbed .

Ralf's explanation that he was conserving the 36-year-old for the games ahead was far more acceptable than his superstar's behaviour.

In fact, Cristiano had just played a key role in United doubling their advantage by providing the assist for Mason Greenwood's goal with a fine chested pass around the centre circle

Manchester United were not good in every aspect during the opening period and were second to every ball, by interim boss Ralf Rangnick's own admission, and Brentford head coach Thomas Frank went a step further in his assessment.

Manchester United are in seventh place, still, despite the victory. The team have now drawn level on points with Arsenal – but the Gunners have a better goal difference and a game in hand.

United’s next game is against West Ham at Old Trafford on Saturday, and the team now have a little more confidence, winning a first league match of 2022 at the third attempt.

Content created and supplied by: Curtis99 (via Opera News )