By Kiproprop (self meida writer) | 2 days

A game that has been a talk of the week between Manchester city and Paris Saint Germain,Trumpets blown ment a great history because the citizens for once in a long time reached the semis.

The first leg which was played at parc de princes(PSG), Manchester city secured two away goals from Kevin de bryune and Ryad mahrez while home goal for PSG was done by maquinnos.Therefore assuring abit of confidence to Guardiola's boys as they played the second leg,With such assurance manchester city went to the second leg in their home ground of Etihad with a stirred momentum to win the game. 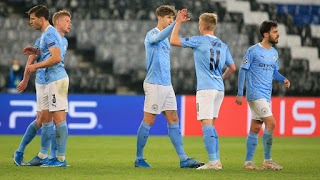 Additionally apart from confidence from the first leg, Guardiola's theatrics and tactical approaches yielded fruit on Tuesday nights football,At which he played defensively and responded tactically with counter attack which left PSG with a reluctant game therefore made a way for foden to attack successfully upfront.

Proportionally manchester city's score sheet of 2-0 against their opponents PSG,Scored by Ryad mahrez made the citizens to tiptoe to the European final.The goals brought a total of 4-1 in the aggregate.

Content created and supplied by: Kiproprop (via Opera News )