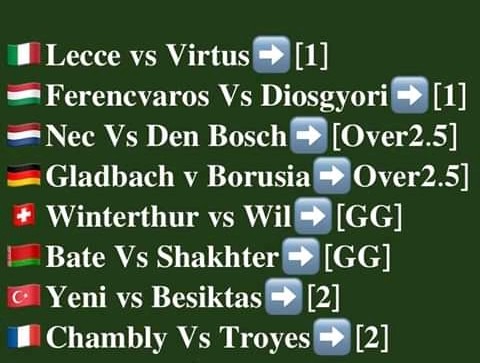 Borussia Monchengladbach have no win in their last five matches.

Borussia Dortmund have won 12 of the last 13 matches against Monchengladbach.

Monchengladbach have lost three of the last four matches against Bundesliga opponents in the German Cup.

Borussia Dortmund have scored 13 goals in the last five matches.

Werder Bremen have seven outright wins in the last 10 matches the German Cup.

Jahn Regensburg have one outright win in their last six matches.

Werder Bremen have four wins in their last 10 matches.

Jahn Regensburg have just one outright win in 13 matches in this competition.

Ferencvaros have scored in each of their last 4 matches, while Diosgyori VTK have scored 5.

Ferencvaros and Diosgyori VTK have not drawn any of their last 11 matches against each other.

Lecce have scored in their last 4 home matches.

Wil have scored in their last 4 home matches.

Troyes have scored in their last 3 away matches.