Modric-Kroos-Casemiro vs Xavi-Iniesta-Busquets, Which One is the Best Midfield Trio?

By Kenyanews254 (self media writer) | 3 months ago 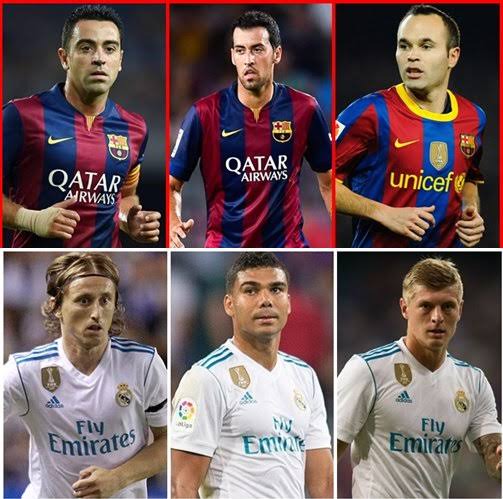 Real Madrid and FC Barcelona are the greatest clubs both in Europe and Spanish football. Real Madrid have won 34 League titles alongside 13 Champions League. On the flip side, FC Barcelona have won 28 La Liga titles together with 5 Champions League titles. The two clubs have been successful because of the best midfield trios in their clubs. FC Barcelona Spanish trio Andres Iniesta, Xavi Hernandez and Sergio Busquets are arguably their greatest midfieders in the club. Real Madrid's Toni Kroos, Luka Modric and Casemiro have also dominated Europe in the last 10 years. Today we are going to compare these two midfield trios and find out which one is better.

Xavi, Iniesta and Busquets were the key players for Pep Guordiola in 2009. They helped the club to win 6 major titles in a single season. They also managed to win the Champions League in 2011. The three midfielders also won the World Cup in 2020 and Euros in 2008 and 2012.

Luka Modric, Kroos and Casemiro have been superb for Real Madrid in recent years. They won four Champions League together with 3 La Liga titles. The three midfielders are still the best players for Los Blancos at Santiago Bernabeu. Luka Modric won the 2018 Ballon D'or after an impressive performance for his club and national team.

Which of the two midfield trios do you think is the best? Leave your comments below.