By Legitbzna (self media writer) | 2 months ago 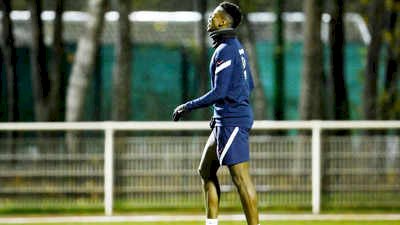 Paul Pogba was pictured leaving France’s training session yesterday with team doctor Frank le Gall after suffering a right thigh injury. This means that the midfielder will not play any part in France’s matches against Finland and Kazakhstan.

In his stead As Roma’s Jordan Veretout has been called up to join the squad.

French Football Federation confirmed the news in a statement that read, “Paul Pogba is forced to withdraw from France’s two games at the Parc Des Prince against Kazakhstan and against Finland in Helsinki.”

The ace missed both of United’s last two Premier League matches which ended up in a defeat against Manchester City in the derby and a 3-0 win against Tottenham- through suspension after he was shown a straight red card in the 5-0 thrashing by Liverpool. 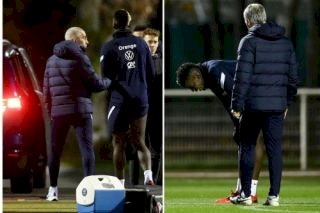 France sit top of Group D with 12points from six games and a victory against Kazakhstan will guarantee them a place in next year’s world cup finals to be hosted in Qatar.

Head coach Didier Deschamps warned his players not to be complacent as they lock horns with a team that is winless in their last seven group games.

“The important thing is that we qualify for the World Cup. All my energy and our concentration must be that,” Deschamps said in a press conference.

France will also travel to Finland next Tuesday.

How England Could Line Up For The FIFA 2022 World Cup

Man Abducts Ex-Lover Child, Kills Him Before Killing Self, Leaves Suicide Note With 500/

Amad out of Cage as he Secures a loan move where he can Play more minutes and Shine.