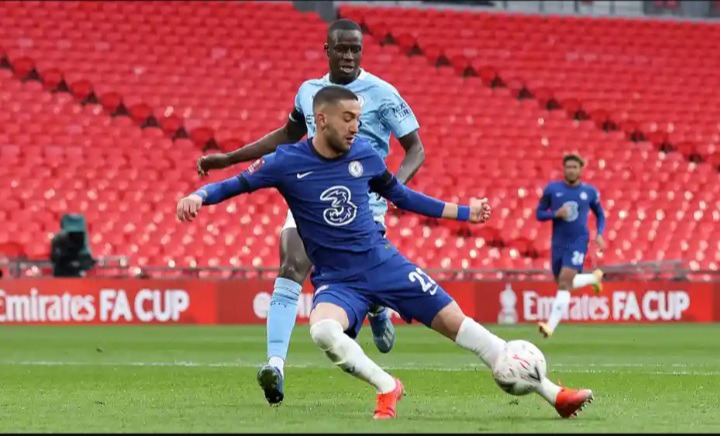 Chelsea booked their place in yet another FA Cup final this evening after the blues won 1:0 against Pep Guardiola's Manchester City at Wembley. Chelsea are in the final for the fourth time in five seasons! What a record they’ve got in this famous old competition.

Chelsea's success has been based on solid defence and excellent performance in the midfield. Hakim Ziyech, the Man-of-the-match, scored the winning goal for the blues. "Everybody is happy, we did a good job, especially in the first half. I still have a lot to work on, but I think I’m on a good way. We know what we are still playing for, and all the ways are open, we are very excited.”Hakim Ziyech told the BBC.

Ziyech had earlier in the game had a goal disallowed while Christian Pulisic also found the net in second-half stoppage time only for the offside flag to be raised.

Thomas Tuchel is now praised for good work he has been doing while at Chelsea.In three months at Chelsea, he has now beaten Pep Guardiola, Jurgen Klopp, Diego Simeone, José Mourinho and Carlo Ancelotti without conceding a single goal either in those six matches.

In a press conference after the match, Thomas Tuchel praised his men especially Hakim Ziyech who was the man of the match."We had the same line-up, Mason, Hakim and Timo, against Liverpool and they were very strong.

Hakim is more a dribbler, a guy who turns in the pickets. Decisions are never personal. Against Crystal Palace, the momentum was for Kai, Mason and Christian to keep going. Hakim showed me he's ready from the bench and in training," Said Tuchel.

Content created and supplied by: Korig_ke (via Opera News )

After Hakim Ziyech Missed in Chelsea's Celebration Photo, This is What Will Happen To Him Today