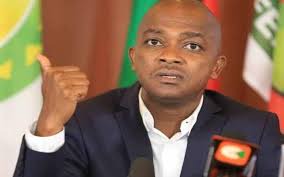 Embattled FKF president Nick Mwendwa has been in the media outlets for the past few weeks, weeks that have witnessed massive amount of scrutiny on his tenure at the helm of the country's top football governance organization.

On Tuesday, Mwendwa was released this afternoon from jail on a 10 million shillings cash bail that will see him appear in court to answer to the charges labelled against him at a later date according to a Nairobi Court.

However, on Tuesday night, the suspended FKF President announced that he has stepped down from his role and revealed that his Vice President Doris Petra will take over his duties.

Declaring his reason to resign, Mwendwa noted that he was pushed by the worsening state of his business empires triggered by numerous cases of apprehension and hefty fines.

Mwendwa affirmed that his family has suffered adverse effects due to the cases of apprehension and prosecution forcing him to tender his resignation letter in the wee hours of the night.

He stated "In light of the foregoing, specifically, the frequent apprehension and detentions, which have adversely affected my family and personal business and whilst I am confident I will be cleared of any wrongdoing in the end,"

He also made it clear that his decision to quit was in the best interest of FKF.

He stated "My decision has been arrived at with the federation's best interest at heart. I want to thank the entire NEC family, for the support you have offered my office and the federation In general, in developing Kenyan football,"

However, he noted that the latest onslaught is a target against his character not about the issues affecting football in the country.

Why Do People Cheat In Relationships

Johnson Sakaja Speaks Ahead Of Mudavadi's Most Anticipated Bomas Event

Gachagua Takes a Swipe at Uhuru-Raila Union, Lashes Out at Uhuru For Abandoning Govt For Opposition