By BibahBM (self media writer) | 3 months ago 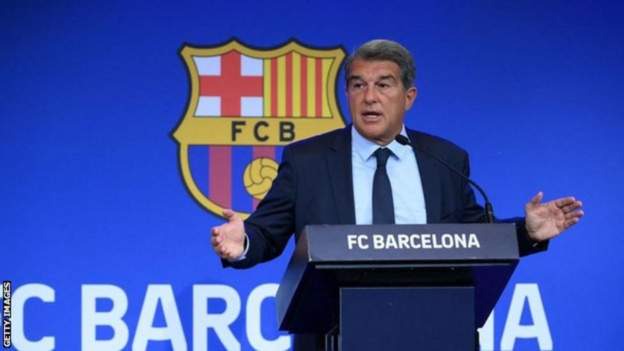 Barcelona president Joan Laporta has revealed that the Spanish club has a debt of £ 1.15bn, calling the situation "extremely worrying". The club's current payroll debt is 103 percent of the club's income.

Laporta has blamed his predecessor Josep Maria Bartomeu for the debt, accusing him of leaving the club in a precarious position. "If we were to extend the contract of Lionel Messi, the salary arrears would reach 110 percent of the total income, an issue that the La Liga league refused to accept."

Messi announced his departure from the club in an emotionally charged speech last week and entered into a two-year contract with PSG. "Our salaries represent 103 percent of the club's income, which is equivalent to between 20-25 percent of our rivals," said Laporta, who was in his second term in office since winning the March election.

The first thing we did when we arrived was we had to apply for a loan of 80 million euros, otherwise we would have failed to pay salaries. The previous regime had a whole lot of deception. Barcelona has a deficit of 451 million euros - it's a very bad legacy. What has been happening is worrying. '

Bartomeu defended himself on a Saturday night letter, claiming that the financial strategies he would have put in place if he had not been forced to resign in October would allow Messi to stay at Barcelona.