Tranmere Rovers, who won their previous game, will hope for a similar result following a 2-1 League Two victory over Bradford City.

It has not been often in recent games where Tranmere Rovers have shown defensive steel. It will be a concern for them that Tranmere Rovers have seen their defence breached in 6 of their previous 6 clashes, giving up 10 goals on the way. While that may be of interest, we will just have to wait and see if such a trend will be sustained in this upcoming game.

The only name on the scoresheet from Harrogate Town was Jack Diamond (24'). Jack Payne (83') was the scorer for Swindon Town.

The stats don’t lie, and Harrogate Town have been scored against in 5 of their last 6 matches, seeing opposing sides hit 9 goals in all. Defensively, Harrogate Town just haven’t been too solid at all. 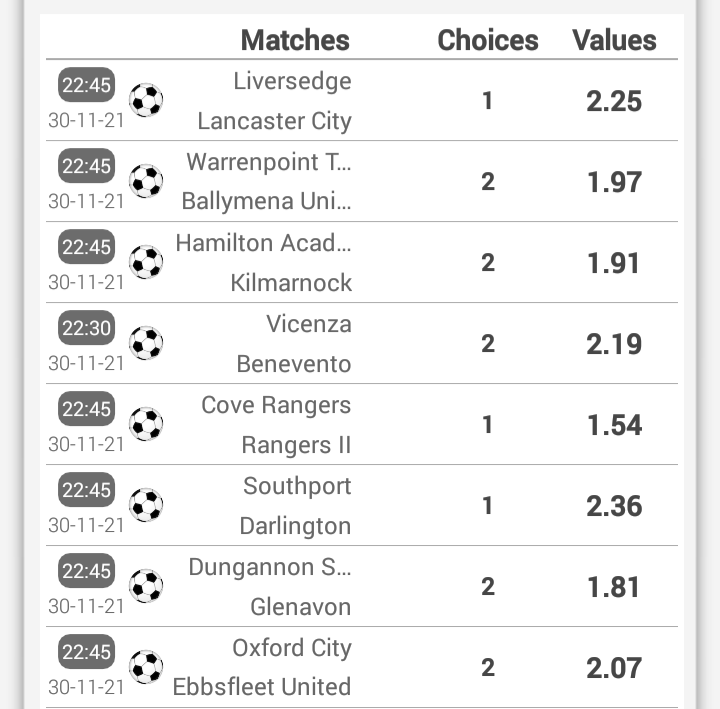 Accrington Stanley fans will want a repeat of their previous result, being a 0-1 League One triumph versus Lincoln City.

The only name on the scoresheet from Accrington Stanley was Colby Bishop (55').

Fixtures with Accrington Stanley have tended to be absorbing ones of late with high scoring being a common characteristic. Over their past half dozen games alone, a total of 20 goals have flown in for both sides combined (at an average of 3.33 goals per game) with 8 of them being chalked up by Accrington Stanley.

Wigan will go into the game after a 1-2 League One win with the eclipse of Plymouth Argyle in their most recent match.

For Wigan Athletic, the goals were scored by Will Keane (35') and Callum Lang (90'). Danny Mayor (43') was the scorer for Plymouth Argyle.

In their previous 6 outings, Wigan Athletic have bagged the sum of 12 goals. Wigan Athletic have additionally got on the scoresheet in every single one of those games. Over that period, they’ve had 7 goals go against them. Even so, it remains to be seen if that trend will persist in this upcoming game.

Wrexham are hoping to win again after their last result, a 2-0 National League triumph vs Bromley.

Fixtures involving Wrexham have tended to be lively affairs lately with plenty of scoring expected. Over their past 6 games alone, a total of 20 goals have flown in for both sides combined (at an average of 3.33 goals per game) with 16 of them belonging to Wrexham.

In their last game, Yeovil Town drew 1-1 in the National League tie with Dover Athletic.

The only player to score from Yeovil Town was Adi Yussuf (78'). TJ Bramble (2') was the scorer for Dover Athletic.

A series of reliable displays by the Yeovil Town defence has resulted in their ‘goals against’ tally standing at 3 from their last 6 clashes overall. Over that same time, the number of goals that they have scored themselves amounts to 8. We shall soon see if that trend can be sustained in this game.

Ahead of this clash, Yeovil Town are unbeaten in their previous 3 league matches away from home.

"Ruto Has Numbers" Kabogo Reacts To Report On Raila's Running Mate, Warns Why He'll Not Deliver