Muguna Clears the Air on his Future at Gor Mahia 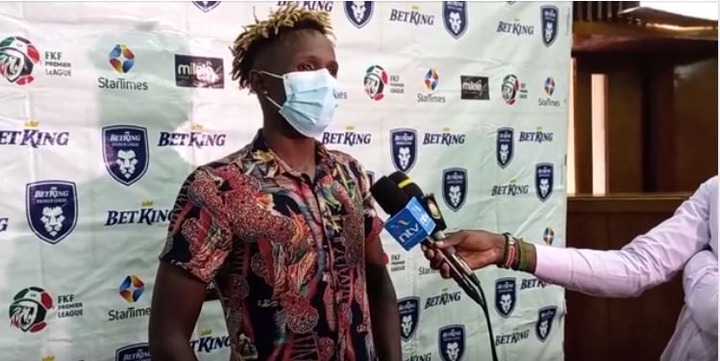 Gor Mahia midfielder Kenneth Muguna has stated that he is currently focused on delivering for Gor Mahia despite recent reports indicating that he might be on his way out of the club.

Speaking to journalists after getting his Covid-19 vaccine, Muguna revealed that he has six months left on his Gor Mahia contract and he is still determined to give his all to the club.

“I still have 6 months left on my contract and I wouldn’t want to comment on my future just yet. I am enjoying everything at the moment and will make a decision at the end of the season” he said.

On the Vaccine, Muguna thanked Football Kenya Federation (FKF) for organizing the vaccination exercise and hoped the league can resume as soon as possible.

“It is very important and health-wise, we needed to get a vaccine as players. I want to thank the federation for organizing this kind of session and I hope that as soon as everyone gets the vaccine we can go back to the pitch” he said.

“It has affected our momentum. If you see our performances at the National team, everyone was superb but right now we have spent like two weeks without playing so the momentum will most definitely go down but we hope once the league resumes everyone will get back to their best” he said.

“We (Gor Mahia) have been poor this season and I feel this break has not helped us either. We are back to square one as we can still not train as a team” he added.

Gor Mahia have had a number of poor performances this season and find themselves at position 7 in the league standings with 22 points, 14 behind league leaders Tusker FC.

"VAR Robbed Us," Chelsea Fans Angered by The VAR After this Happened