By Kutabrian (self meida writer) | 7 days 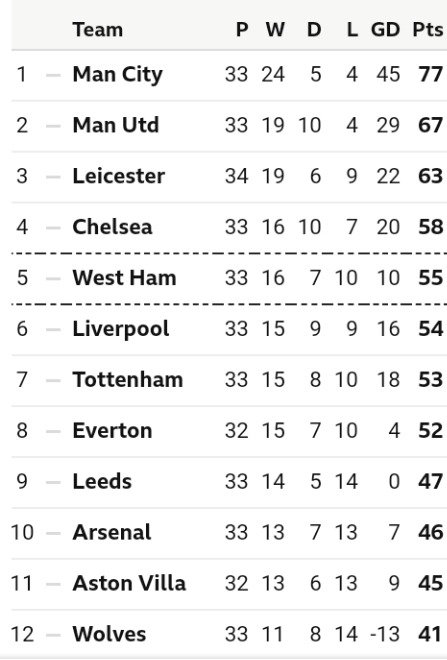 They are closely followed by their neighbours, Manchester United in position two.The Reds have 67 points after 33 matches just 10 points behind the blues.as it's they have also secured a spot in Europe competition.

Leicester city, Chelsea and west Ham each with 63, 58 and 53 respectfully follows. The clubs showcase an exciting competition as each is eying Europe.

Chelsea will play with Fulham today,they must win to keep their dream life.Theg had extra in the midweek where they played Real Madrid in EUFA champions league Semi Finals.They are just five points behind Leicester city.

Tottenham Hotspurs and Liverpool are also eying top four but only hope is to play Europa league if they win the remaining matches.

Arsenal is not nearer top seven to qualify for any Europe competition.Hower, Arsenal can qualify through back door if they are Crowned the Europa league champions.