The murder of a Nairobi schoolgirl has been traced to a convicted matatu driver.

In April, a convicted matatu driver was arrested on suspicion of murdering a Grade Six student in Nairobi. 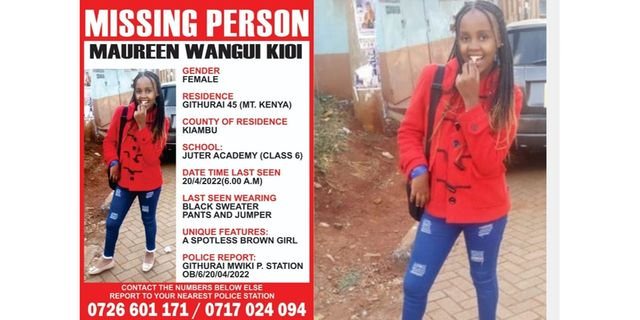 Charles Githinji, who pleaded guilty to stealing motor vehicle spare parts last month and was sentenced to 18 months in Naivasha prison, is supposedly the main suspect in the kidnapping of a schoolgirl in Kasarani on April 20.

Before stealing four tyres from his employer's car, Githinji was a matatu driver who did his profession along the Nairobi-Nakuru route.He then travelled to Mombasa for a few days before returning quietly to his family's home in Kerugoya, Kirinyaga County, where he was detained on April 27.

Mr Githinji had driven his matatu to Nakuru earlier this month but refused to go back to Nairobi because he was "too weary," according to police.

"Rather than returning to Nairobi with passengers, he drove the Sacco vehicle to Naivasha, removed all the tyres, and sold them, then escaped to Mombasa," an officer explained. The stolen tyres were recovered and given as exhibits in court.

Githinji was accused with stealing motor vehicle spare parts in violation of Penal Code Sections 268 (1) and 279 (a). He was taken to the hospital first.At one point, the magistrate considered imposing a non-custodial punishment on him. "He was a nice person who didn't do anything wrong," an officer stated.

Githinji was also being investigated by Naivasha police for the kidnapping of a Jupiter Academy teenager who went missing on April 20.Githinji is suspected of committing the crime after leaving Mombasa, according to detectives."We had no idea the suspect was connected in a kidnapping case." "We were waiting for him to appear in court when we learned that he had been transported to Mwiki police station in connection with the Grade Six student's disappearance," a detective stated.

"They informed us that they were investigating another incident involving the suspect, and they left with Githinji after following due process," he said.

"I was taken aback when I saw him on national news in connection with the student's death. "Throughout the proceedings, he maintained an innocent demeanour, eventually pleading guilty after appearing in court," he continued.

"The matter was handled by the crime desk at Naivasha Police Station before it was picked up by the officers from Nairobi where the earlier crime was committed," said Adan Hassan of the Naivasha Directorate of Criminal Investigations.

Content created and supplied by: @naph (via Opera News )

Kagwanja: There Is a Clear Lack Of Confidence By Juliana Cherera And 4 Dissenting IEBC Commissioners