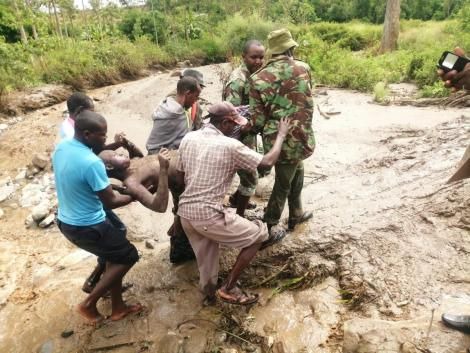 Three out of the five miners who were still trapped in the collapsed gold mine in Siaya County were rescued on Wednesday morning, December 8.

The miners who were trapped for seven days were pulled out of the debris at 2 am and rushed to the Bondo Subcounty Hospital for treatment.

Bondo Sub County Deputy County Commissioner Richard Karani confirmed the news, offering relief to families that had camped at the site, eagerly waiting for their loved ones to be saved.

This brings the total number of miners rescued to six as emergency service providers had saved three others after the quarry collapsed.

Rescuers also retrieved one body from the debris in Abimbo Village, Bondo Sub-County, bringing the death toll to three.

Deputy County Commissioner Richard Karani assured residents and families that the emergency service providers and police would strive to rescue the last miner who is still holed up in the quarry.

Residents hope that he will make it out alive, more than a week after the quarry collapsed on Tuesday, December 2.

Siaya County Deputy Governor James Okumbe who visited the site a few days ago stated that a rapid response team was liasing with the Red Cross and volunteers to find the lone miner.

“We have two ambulances on the ground. We donated an excavator, fire engine, oxygen supply, fuel and snacks to ensure the rescue teams remain at the site and carry on with the job to save the lives," Okumbe stated.

He added that the county would outline measures to avert such incidents in the future.

Livingstone Odhiambo, who was rescued on Saturday, December 4, gave an account of the ordeal that befell the gold diggers on the fateful day.

Odhiambo was trapped alongside eight others, including his son Enos Ongong'a who unfortunately succumbed.

“I tried pulling my son out but gave up after realising he had incurred critical injuries. He died a few minutes later as I watched helplessly,” Odhiambo recalled.

The miner added that while waiting to be saved, he maintained communication with the multi-agency rescue team using pipes that were slipped through the debris.

The pipes were also used to supply the miners with air, which in turn helped cool down the high temperatures inside the collapsed quarry. 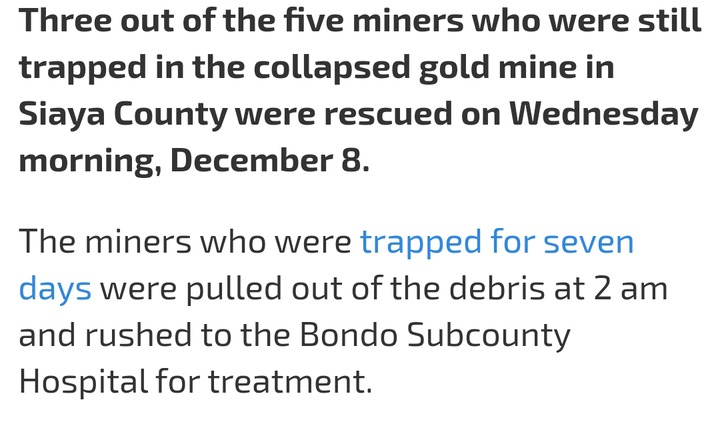