By your-udaku-mate (self media writer) | 2 months ago

After being sworn in, the new IG made an effort to clear the air on claims made on social media that he was linked to the CJ. "Martha has been referred to as my wife by some. Nothing could be more false," IG Koome reasoned. 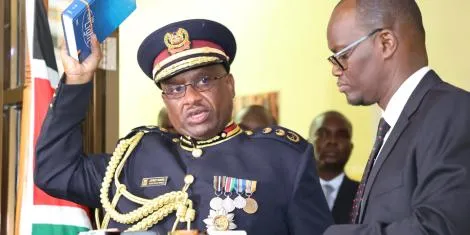 He clarified that neither he nor Chief Justice Martha Koome's spouse, brother, or father were related to her. He clarified, "I have no blood ties to the CJ; she is married to a Koome, and my last name is Koome."

He said that his office would respect Kenya's judicial institutions and adhere to court rulings as required. The IG did, however, issue a warning to criminals that if they attempted to break the law, police officers would not spare them. Koome continued by saying that while it is legal to use guns, police officers are urged to use prudence and show respect for human life.

CJ Martha Koome asked the police to uphold law and order but issued a warning that justice would be administered by the courts impartially and without favor. Mutyambai was replaced by Japheth Komme after being on terminal leave until his retirement. On Tuesday, September 27, President William Ruto made the constitutional nomination for the IG.