As it is always said, you will never die before the date programmed by God arrives. A youthful boy who survived being buried in Kasarani where a seven-storey building collapsed narrates how he used his skill to escape death.

Emotions ran high in Kasarani where an uncompleted seven-storey building sagged to its knees, burying unidentified number of workers who were in the process of pushing its competition over the line.

Efforts to rescue workers who are said to be stuck in the crumbled structure is underway, but one of the victims who luckily found an escape route before being cut by their own knife had a story to narrate to the media people who arrived at the scene hours after the incident.

A victim who identified himself as Moses from Githurai said that the fact the he survived uninjured does not mean that all his workmates were safe. He said that apart from the four who had been rescued and their contractor who had departed the scene after using his tactics survive the danger, a good number including a lady who brought them lunch were still breathing dust in the building.

Narrating how he found a second chance to live as reported by Nation, Moses says that he had the building collapsing while in a company of his friends who were narrating their encounter with police officers who visited the site earlier in the day, warning them to vacate the site. 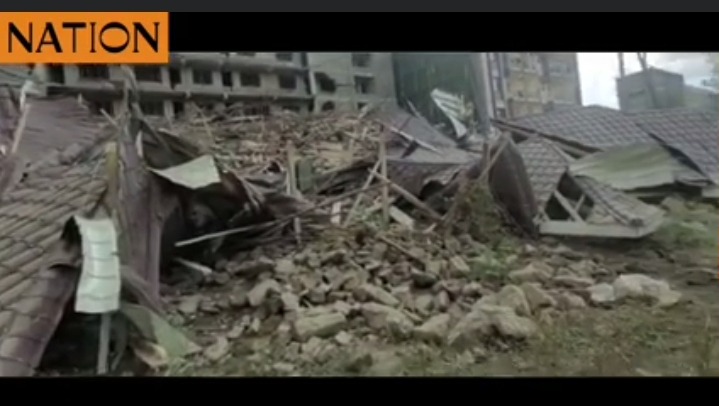 "Our friends who had been captured by police returned and were now telling us how the officers delt with them. From where I was standing, I had the building collapsing. I had to jump and hold the pipes ( instead the collapsing house) near the window then jumped through the window. Luckily, I fell on the iron roofs of houses adjacent to the building." Moses said as he narrated the incident to a section of news reporters who interviewed him.