Kiambi Death Probe: Wife, Doctor And Neighbours Among 5 Who Have Recorded Statements With Detectives

Detectives from the DCI homicide department have now taken over probes into the death of businessman Francis Kiambi.

Kiambi, who prior to his death was a director of an alcohol distillery in Nairobi was found dead on Sunday hours after he and the spouse came back to their Karen home.

At least five people among them the businessman wife, workers, neighbours and the doctor who confirmed Kiambi dead have to record statements.

Mary Waigwe Muthoni, female companion to the businessman-cum-politician informed the police on Sunday that she and Kiambi had often visited the social joint in Karen and came home some hours after mid-night.

A police report on the issue recorded by Karen Police Station said the duo got into some domestic brawl after the wife allegedly refused to be a guarantor in a Sh2b loan he sought expand his business.

This is why the husband and wife opted to sleepd in separate bedrooms in their house. 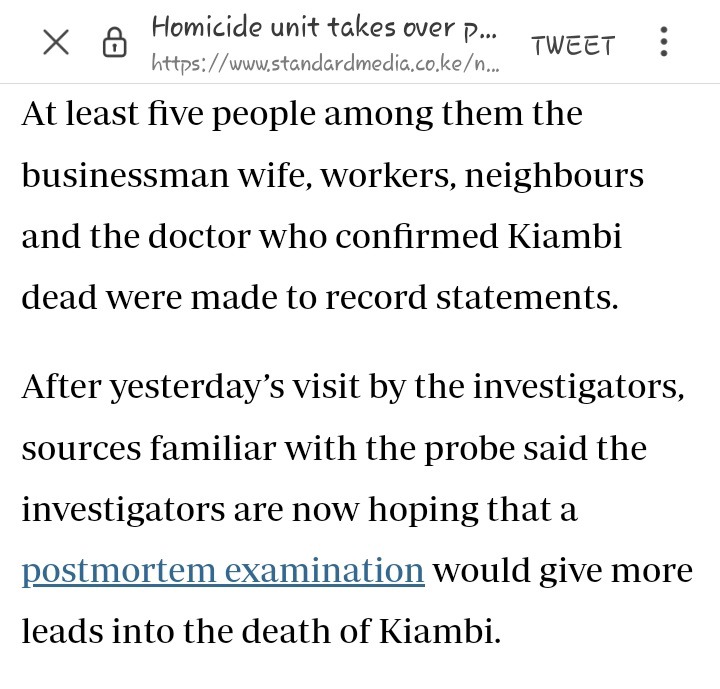 The following day morning, Muthoni toured the bedroom where the spouse had slept that night and that is when she found out that he (Kiambi) had vomited.

Doctors from Karen Hospital were called and established that he died on Sunday at around 9:02am.

On Monday, the homicide investigators toured the residence for the first time seeking answers into his death.