Three police officers from Ruai are currently being questioned following an incident that happened today in the morning after one of the three police officers allegedly shot a man dead by mistake while chasing suspected Thugs who were on a motorbike. 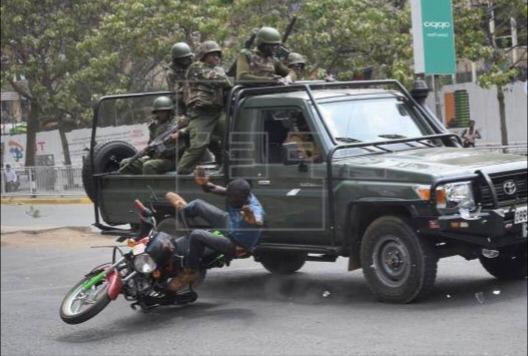 In a news report that that has been shared by a reliable source of information, it has been revealed that the 3 officers were chasing a group of suspects who had allegedly stolen a motorcycle in an undisclosed location. However, the suspects Reportedly went to a congested location after which they managed to flee from the police.

In attempts to get the crowd to make way, the officers whose guns have been confiscated revealed that they fired a couple of shots in the air. Unluckily, one of the bullets is reported to have hit a man who was walking by killing him on the spot.

Kenyans who took to their different social media accounts to express their opinions and suggestions on suggestions on the matter have called d upon the inspector General of police, Hillary Mutyambai to conduct an investigation in order to find out what happened or rather what is causing the increasing number of police officers shooting innocent civilians in the country.

According to the reports given by most Kenyans, they claimed that it was so unfortunate that the deceased had to die despite the fact that he was not in the wrong side of the law. At the same time, kenyans have called upon the police to make sure they compensate the family of the claiming that it would be wrong for them to leave the family with the weight of burying the deceased despite the fact that he died through the hands of one of the police officers who they said should be investigated.

Babu Owino Goes Back To His Roots, Shares Photos Of Their House In Nyalenda slums

Babu Owino And Family Go Back To Their House In Nyalenda Slums, Kisumu County (Photos)

Video: Huge Blunder Made By Rogue Matatu Driver Before Painfully Killing A Petrol Attendant In Ruaka

"I Am Not A Moving Museum." Akothee Angry With A Fan Who Took Videos Of Her Without Her Consent.