By Cheboi_Rewrites☆ (self media writer) | 5 months ago

Dramatic Scenes have been witnessed in Ruai region on Wednesday afternoon after a notorious gang leader engaged in heavy exchange of fire with highly trained sleuths attached to the Directorate of Criminal Investigations (DCI). 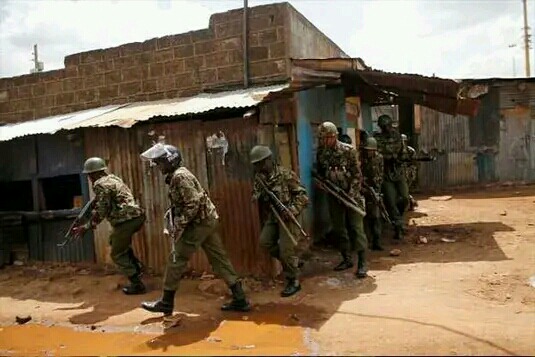 According to sources, the ring leader who has been identified as Paul Murithi Naomi refused to surrender to sleuths who had knocked on his door posing a 'mare mare' peddlers.

On the first attempt by one daring detective, Murithi opened the door halfway and chased him away, claiming that he doesn't need his goods and he should never come back to his house again.

On the second attempt, the detective came with his accomplices, introduced themselves and requested for a dialogue with him. However, instead of accepting the deal, Murithi chose a fight over his life. He withdrew his gun and opened fire on the detectives through his window. A shootout ensued as the detectives responded to the provocation with precision.

Moments later, the area was brought to calm as Murithi lost the battle and detectives gained entry into his house where they found his lifeless body lying in a pool of blood.

Among the trove of evidence recovered from the incidence includes; 11 spent cartridges and a sceska pistol serial number B 681256 loaded with four rounds of 9mm calibre.

Preliminary investigations revealed that the firearm was stolen from a civilian weeks ago during an ambush that led him lose property worth half a million Kenyan shillings.

Meanwhile, the suspect's body is being preserved in the morgue.