Doctor Repays His Elderly Guardian With Memorable Flight to Nairobi

By Newsnus (self meida writer) | 4 days 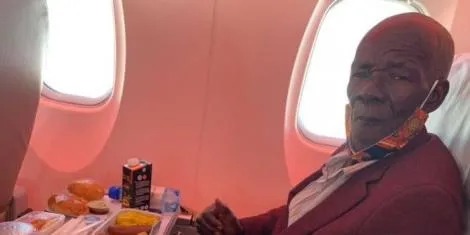 A Ugandan doctor touched the hearts of many when he shared a story of how he surprised his guardian with a memorable trip to Nairobi.

Henry Mutebe narrated on Facebook how his guardian Wilson Dhabangi, took up a parental role after he lost his father while his mother was working out of town to make ends meet.

In the post, Mutebe stated that Dhabangi was a villager who operated a bicycle business, running errands for people. The old man learnt that the young boy did not have anyone visiting him in school and took up the role.

Dhabangi would visit young Mutebe in school on Sundays and carry nuts. According to the doctor, other children would tease him over for being visited by an old man who wore worn-out slippers and an old bicycle.

"This man visited me every Sunday for as long as school was open. That’s roughly over 100 Sundays over between 1997-1999. I do not remember any Sunday he did not come to visit me," Mutebe wrote.

"It did not matter whether it rained or not…whether he was sick or well. He would ride his bicycle and come visit me."

The doctor expressed his gratitude to Dhabangi for being a father figure and encouraging him to stay in school and work hard cautioning the young Mutebe that he would end up like him if he did not take his studies seriously.

Mutebe worked hard in school and vowed to surprise Mzee Dhabangi and pay him back for his kindness. He organized a trip to Nairobi for the 74-year-old and another 'aunt' Rebecca who took care of them when their mother was away.

The doctor informed Uganda Airlines what he had planned for his guests and the airline also planned a surprise for the trio.

Mutebe said: "Uganda airlines said they want to celebrate Wilson and Rebecca for the good they have done for me. They tell us that Wilson, Rebecca, and I have been upgraded to Business Class. The pilot came over…thanked Rebecca and Wilson ...and said he had been inspired and challenged by their story. We set off for Nairobi."

"I have looked to this day for years…the day I would put this man and Rebecca (I call her Aunt Becca) in the sky…and fulfil my promise to them which I made when I was young. I told them that one day, we shall fly together in an airplane. I am glad that life has given me the blessing to achieve this dream."

Mzee Dhabangi told Mutebe that he had seen a plane once before when Ugandan dictator Idi Amin landed near his village in a helicopter.