By Wesleyhubb (self media writer) | 2 months ago

A passenger bus belonging to the Guardian bus service has plunged into a river. 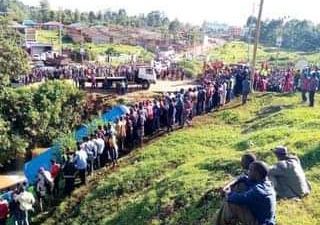 According to reports, the river is located in Nyamarambe sub location.

So far, officials from Guardian's Kisii office have confirmed these accident that has occurred today in the morning, November 26.

According to the officials, several passengers have sustained serious injuries during the accident.

The officials have also stated that the injured passengers have been transferred to Kisii Teaching and Referral Hospital, seven kilometres from the accident scene.

According to Kisii traffic police, The cause of the accident is yet to be established.

Police officers have also stated that Guardian Angel's Kisii office has confirmed that its headquarters in Nairobi will release a statement on the incident.

Note; A similar accident occurred at the same spot on November 18, 2016, when Nyamira Express Bus and Toyota Fielder collided.

Two people were seriously injured in the accident, leaving the Fielder car destroyed at the rear.