A 45-year-old man stayed with his mother's dead body inside a makeshift church, Kirinyaga County.

Police said that the duo, identified as James Muchira and his wife were arrested at Mutithi area on Monday night after his friends, together by the suspect's brother Evans Mwaniki, called the area assistant chief to intervene, according to Mwea-West Sub-County Police boss Wilson Koskei.

It is reported that the accused declined to let neighbours to get in his house, which he used as a church dubbed "God's mountain of Believers."

The suspect reportedly took the deceased from a hospital where she was undergoing medical treatment so that he prays for her at his home church.

The shocked residents said they were unable to explain how the family stayed with the dead body despite the foul smell in their home.

In bid to prevent them from charged crowd who were yet to lynch them, Muchira, his sweetheart, and another lady were hurriedly frogmarched to Kiamaciri police station.

Muchira had told his neighbors that his mum would come back to life and live with her family on Monday night.

The body of Tabitha Wakathare was transferred to the Kerugoya hospital morgue pending autopsy. 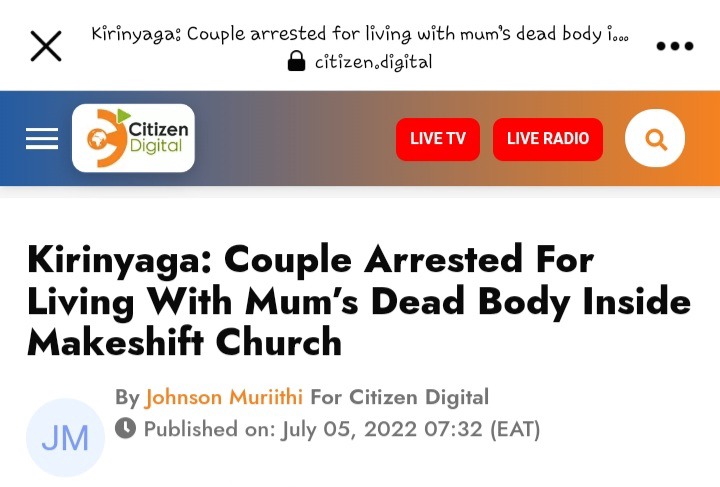 Gideon Moi defeated in his Senatorial bid in Baringo.