By Powellblog (self media writer) | 2 months ago

It has now emerged that the lady who was trying to have a conversation with Interior CS Fred Matiang’I had lied to former Nairobi governor that she was deaf and dumb forcing the former Nairobi boss to look for a translator, according to k24 digital they have tapes detailing events on that day, according to the news company Christine Nyakundi lied on where she comes from, when she was being interviewed Christine claimed that she wanted to ask Matiang’i to transfer some police officers from Nyamira,but reporters from k24 digital digged on her whereabouts and confirmed that Christine is resident of Itumbe Kisii county. 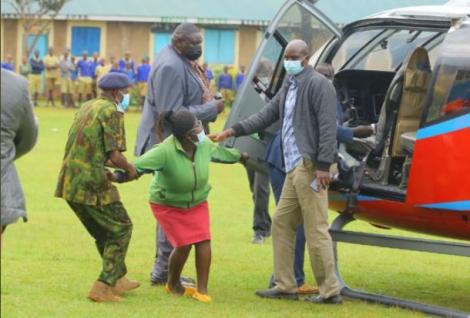 During Sonko’s incident Nyakundi tried to fight her way into Sonko’s entourage but was stopped but after some struggle with Sonko's bodyguards she was allowed to have a conversation with Sonko,she was taped telling Mike Sonko that she is sick and needed medical attention,Nyakundi asked former Nairobi Governor to give her 110,000 thousand for her medication, even Sonko's handlers confirmed that the lady was sick,it was never confirmed if she was given the money or not.

But three years later after causing mayhem with Mike Sonko this time she sneaked into Cs Matiang’I security detail but was not lucky enough to be given a chance with Cs Matiang’I,during an exclusive interview she thwarted claims of asking money, but this expose by k24 however alleges that the lady is prone to exploiting and conning VIPS when she meets them.

Every Parent Should See This, Sad Story Of How A Little Girl Accidentally Chocked Herself To Death

You Should Be Using These Google Messages Hidden Features