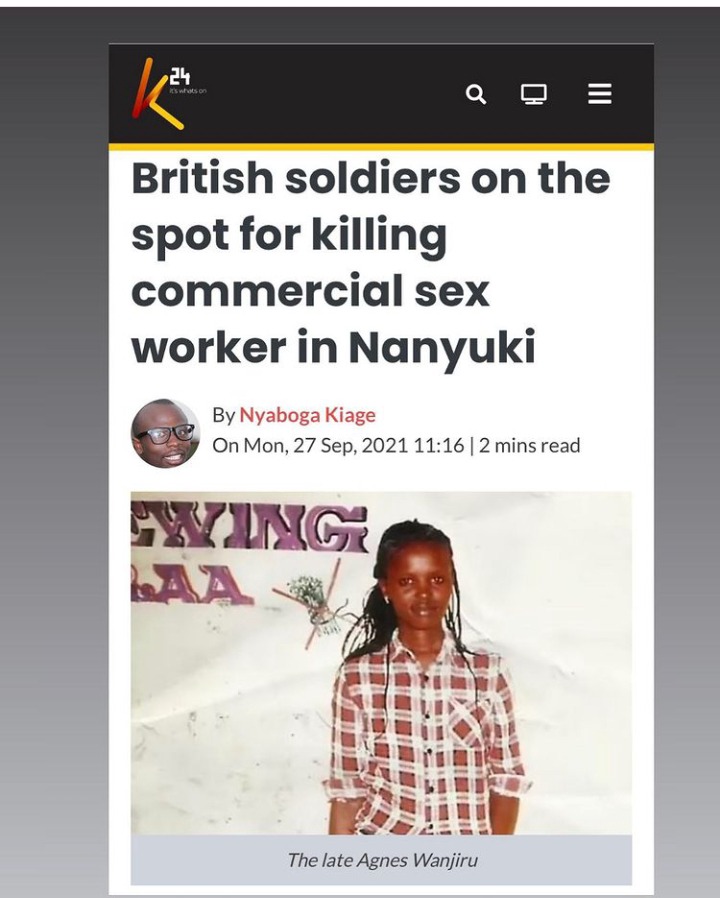 The death of a commercial sex worker nine years ago in Nanyuki,has come back to haunt nine British soldiers who are being questioned in connection to her murder.

The lifeless body of a 21 year old, Agnes Wanjiru,was found two months after she was reported missing inside a septic tank at a local hotel.

On the fateful night,the joint was a bee-hive of activities where tens of British soldiers were drinking beer, dancing with local women and some even going with them to their rooms.

Wanjiru, was seen leaving the seating area walking next to one of the British soldiers and that was the last time she was seen alive.

The case was not any different for her as that's the routine of the sex workers.

It's been nine years since the demise of Wanjiru and her family is seeking justice hoping that the matter will one day be settled and the culprit arrested for stubbing before dumping her body inside a septic tank.

They believe that the matter was hidden by Kenya and security agencies with the aim of maintaining diplomatic ties with United Kingdom(UK).

According to the Sunday Times, at the time the body was discovered,the soldiers had gone back to their home country but one of them was heard bragging of committing murder while in Kenya.

This is just too sad to swallow bragging killing a powerless girl that's been out all night just to survive.If she had another alternative,k don't think she would've be doing this.I pray the family get justice and that bastard get arrested.

Maajabu Haya? Sombre Mood In Garisa, See What Police Did That Has Left Many Emotional

8 Adorable Photos of KMTC Student Murdered By Boyfriend at Kamukunji

Frenemies, Discover The Roots Of Mounting Tension Between Rwandan Kagame And Ugandan Museveni