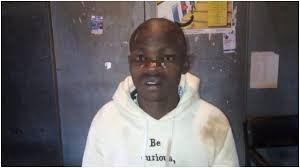 The suspected Ruiru serial Killer Paul Magara Morara has revealed to the police that he was paid by church to kill his victims. Morara who was arrested on Friday while trying to kill another woman also revealed the amount of money he was being paid per the victim he killed. According to reports on Saturday Daily Nation newspaper, Magara raped his victims before killing them, chopping their breasts and taking a way their underwear.

Investigation is still going on as the suspect is under custody and will be arraigned in court soon.