By @newskali (self media writer) | 3 months ago 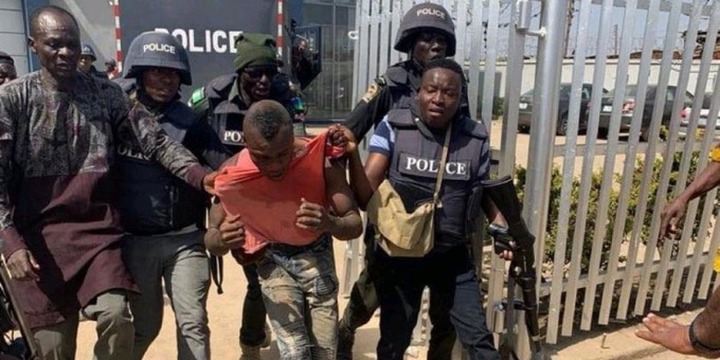 After snatching a cellphone from a detective driving an unmarked police vehicle and defying instructions to stop, two robbery suspects are being treated at a city hospital for gunshot wounds.

The robbery suspects who were shamelessly stealing cellphones from vehicles at the Allsopps junction last evening met chief inspector Elizabeth Lumumba, who was in her element.

The suspects then proceeded to steal vehicle owners of their possessions, taking advantage of the heavy traffic that occurs during rush hour at the intersection.

However, since the thugs disobeyed instructions to stop, Elizabeth from DCI's Anti Narcotics branch and a fellow agent in the back seat leaped from the van, drew out their pistols, and fired two bullets at the attackers. The goons, who had each been shot in the legs, risked their wounds and fled to Ruaraka. This attracted the attention of other motorists, who, emboldened by the presence of the sleuths, sprang out of their cars and participated in the chase, completely unaware of the danger they had put themselves in.

Elizabeth had to choose between telling the motorists to stay in their cars and pursue the suspects because the mob had been joined by enraged 'nduthi' men who had cornered the thugs a few meters away. Following that, the raucous throng unleashed a barrage of hard blows as street justice was meted out on the miscreants, disfiguring their mandibular anatomy and facial look. The two detectives' pleas to allow the law take its course were ignored, as the 'nduthi' men resumed their onslaught, accusing the thugs of sullying their good name by committing crimes on motorcycles. The Officer Commanding Ruaraka Police Station and a group of his officers had to intervene to quiet the enraged mob and rescue the hostages.

It needed the intervention of the Officer Commanding Ruaraka Police Station and a contingent of his officers to quiet the enraged crowd and save the suspects from their impending deaths. The two thugs whose lives are on the line are currently receiving treatment at a city hospital, while Starehe-based detectives wait for their release before charging them in accordance with the law.