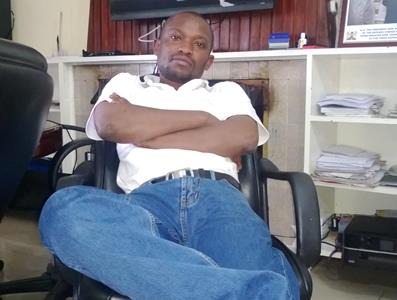 The family of missing controversial blogger Bogonko Bosire who disappeared in September 2013, was recently dealt another blow after Bosire's young brother committed suicide.

According to Bosire's sister Ms. Winnie Bosire, their young brother Joshua Bosire was found dead on the early morning hours of Sunday.

Before then, Joshua had arrived home drunk, and told his mother that he was going to commit suicide. He then rushed into his house, where he ingested poison.

"It was on Sunday at 3:52 am, he took poison out of depression. On the fateful day, he came home very drunk and told our mother that he is going to die...

...He went to his room and took poison and came out of the room, sipping from the bottle he was holding as mum was looking at him. He then collapsed suddenly," recalled Ms. Winnie.

Prior to his demise, Joshua looked depressed. His older brother (Bogonko's) disappearance had so much affected him. The situation was even worsened by their parents' illness.

Shortly after Bogonko went missing, their father lost his memory, while their mother developed blood pressure. Ms. Winnie who is also a widow called upon well wishers to help in Joshua's send-off expenses.

She (Winnie) also lamented how they had not been updated by anyone about investigations over Bogonko's disappearance.

Bogonko, the bold writer and owner of Jackal News, was popular for his daring approach to stories that many of his peers shied away from.

Among his final posts on the site, Bogonko had dug deep into the private lives of powerful people within the country. A few days leading to his disappearance, he had expressed fears for his life.

By then, police noted that investigations were in top gear to track him down.