By kwambokaAngira (self media writer) | 18 days ago 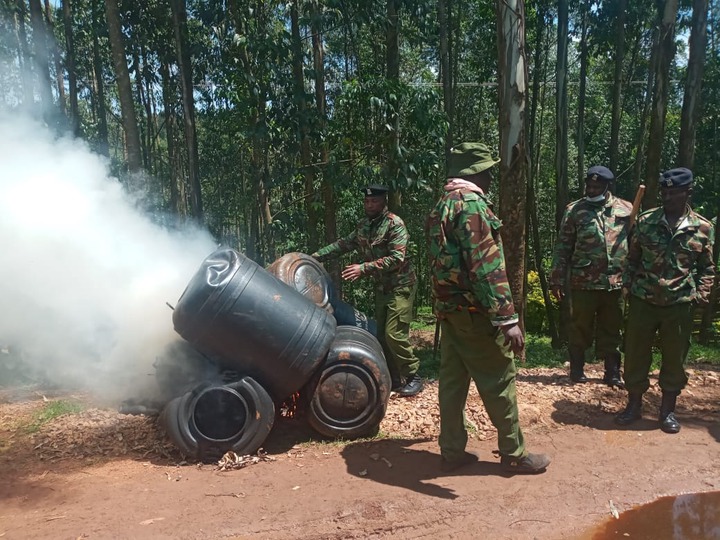 Police officers in Kisii destroy over 100, 000 liters of illicit brew

The crackdown comes after the launch of a three month Rapid Results Initiative cracking illicit brew.

The operation was led by Kisii South OCPD Charles Machinji and police officers.

Owners of the dens escaped the scene during the operation after were tipped off on the raid.

Addressing the press at Kisii South during the operation OCPD said that many lives have been lost through illicit brew.

“We are not going to relent in the fight against illicit brew, we will ensure that we have whipped out the illicit liquor in the county, “he said.

He cited that those brew has destroyed many families by killing their breadwinners and those who survive are not able to carry on with their normal duties, that is why we should all join hands to eradicate the illicit brew.

He urged the public to help curb consumption of illicit brew in order to stop liquor-related deaths.

Machinji cautioned residents against consuming the brew, saying it is prepared in unhygienic conditions.

Machinji said that officers would continue carrying out impromptu with an aim of arresting those involved and arraign them in court.

The equipment used to make the brews were confiscated and destroyed.

OCPD said that the crackdown will continue until they ensure that the illicit brew has seized in the county.

He asked those brewing illicit brew to cease and engage in legal business activities.

" Bandits Fired 10 Bullets In Her Body, " Details On How Bandits Killed The Elgeyo Marakwet Mother

Signs that a girl has feelings for you