By Contentcreator319 (self media writer) | 1 month ago

The late Musyoka was the second child of four siblings, according to Elizabeth.

find out who killed him," Elizabeth remarked.

At the deceased's rural residence in Muthetheni village in Mwala, Machakos County, she gave a press conference on Friday.

"I have three kids left: two girls and a boy. Elizabeth said, "I feel so horrible.

Last Friday night, Elizabeth claimed to have learned of her son's absence.

"I'm speechless because I adored him. God cherished him. May he find eternal peace for his soul. He loved people, and I raised him in the church," she said. 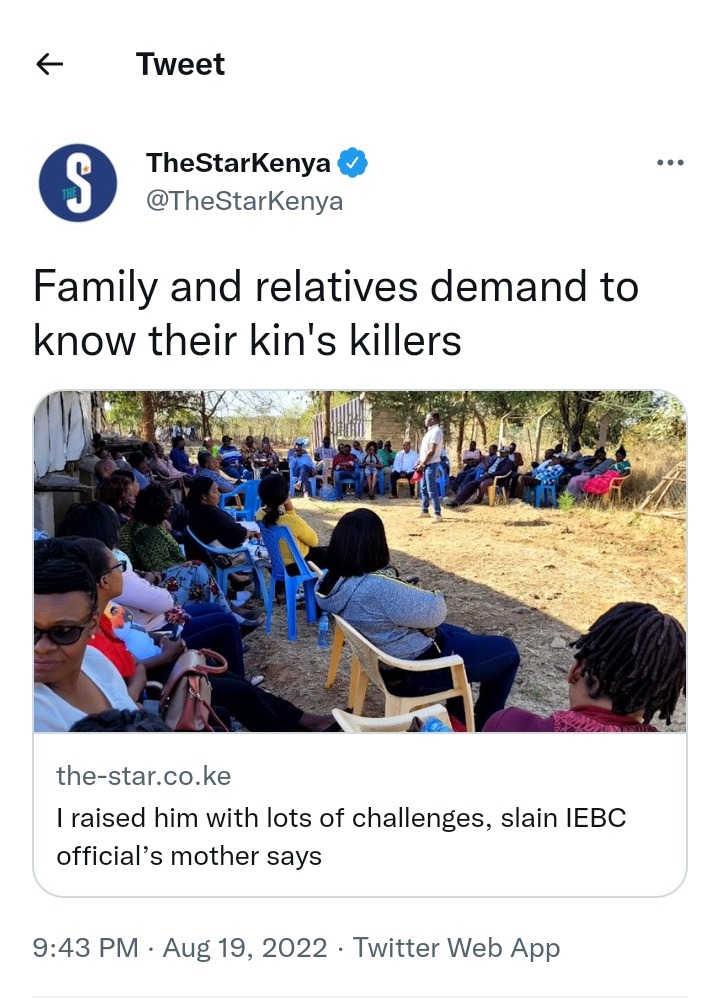 Musyoka Nzuki, the father of the deceased, was inconsolable when media arrived.

"I nearly passed out when I received the news. Daniel is my child, and he always complies with my instructions. Every time someone talks negatively about my son, I feel horrible. When questioned about my kid, I feel even more hurt, so I don't want to talk about him, Nzuki told the press.

Prudence Mbolo, the daughter of the IEBC officer, asserted that no amount of investigation will win her father back.

But all I want them to know is that they fell short. Prudence replied, "They failed someone who wouldn't have failed them.

She claimed that on August 9, Election Day, early in the morning, she had her last conversation with her deceased father.

We spoke on WhatsApp, and during that time, Prudence remarked, "I was sending him good vibes and strength for the elections."

The following day, I attempted to phone him, but he wasn't available. We began a physical search for my dad as well as an online campaign to alert people that he was gone as a result of it."

Prudence claimed that their last encounter took occurred at their rural Machakos home, the same location where she gave the press interview.

"He had the purest heart, was funny and joyful, and was a devout follower of Christ. Prudence stated, "He stood by what he believed in and wasn't one who could be compromised.

"They failed my dad, who was only trying to perform his job and follow the law," someone said.

Musyoka was transferred from Loitoktok to Nairobi by his employer, the IEBC, according to Musyoka's cousin and close friend Nicholas Mutinda, who claimed the deceased resided with him.

Before purchasing a home in the Aviation neighborhood, he lived with me in my home, Mutinda recalled.

He claimed that on the day the dead vanished, one of the deceased's coworkers called him on the phone to let him know that his cousin had gone missing.

"We started looking for him. Two days prior to his disappearance, we had communicated," Mutinda stated.

"He had informed me that things weren't going well at work, but that he would call if anything came up.