A man has taken to his Facebook account to call upon the parents of two children who he allegedly found roaming around the streets of Lucky summer in the middle of the night. 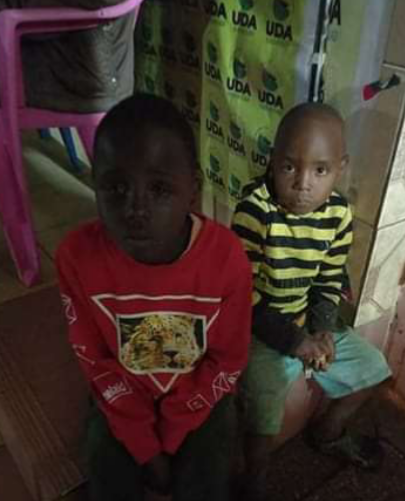 According to the reports given by the man who has been identified as Omollo Henry, he revealed that the two who have been identified as Patrick Murathe and Anthony Njoroge were found in Lucky summer which is several miles away from where they currently live in Mwiki.

Due to this reason, Henry urged the parents of the missing kids to go for them claiming that he has already reported the matter to the police station. In his caption, he claimed that the two who are friends belong to different families adding that the mother of the older one is called Jane Njeri while the mother of the youngest one is called Nancy Wangui adding that they are in safe hands.

This is happening at the same time when the government through the inspector General of police, Hillary Mutyambai has called upon parents to make sure they stay vigilant especially during holiday seasons when most teenagers tend to dissappear from their families.

In his own words, Hillary Mutyambai said that it was so unfortunate that most parents have now abandoned their responsibility of taking care of their children to the society along with the police. Mutyambai who expressed his fear and concerns over the rising cases of abductions and disappearances in the country has urged parents to be responsible.

In the past few months, a number of kenyans have gone missing under unclear circumstances where some have been found dead, alive as others are yet to be found. According to the reports given by DCIs, he said that they have formed an elite group of officers who are currently investigating this incidents. Magix Enga Opens Up On Joining Illuminati For Fame