Property worth unknown value has been destroyed after fire razed down a section of Gikomba Market on Wednesday early morning October 20.

The fire, whose cause has not been established, started at the Southern part of the open-air market opposite the Jua Kali section and adjacent to Muthurwa Primary School located in Pumwani.

Due to the fire, several sheds were reduced to ashes. Some traders and other on-lookers who were on the ground, attempted to salvage some of the property from the ravaging inferno.

By the time of publication, the government and Nairobi County Government had not issued an official statement on the cause of the fire and the cost of damage.

The flea market is popular with traders who sell second-hand clothes, shoes, bags among other items.

However, the incidences of fire have been on the rise in recent times. In less than two months, the market has been razed down by mysterious fire again destroying properties.

Last August, another fire was witnessed in the market. It broke out at night at the Molo Line area popularly known as Ghorofani and raged till dawn.

After the tragic incident, the traders sued Nairobi County Government demanding Ksh20 billion in compensation. Through their representative, they argued that since 2015, 15 fire incidences have occurred that have resulted in huge losses.

This comes as the government maintained that they havehave plans in the pipeline to avert recurrence of similar incidences. 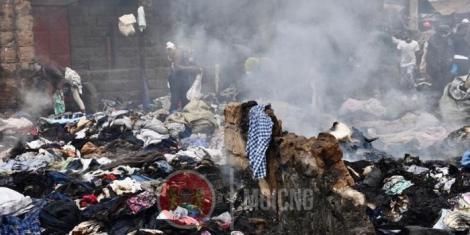