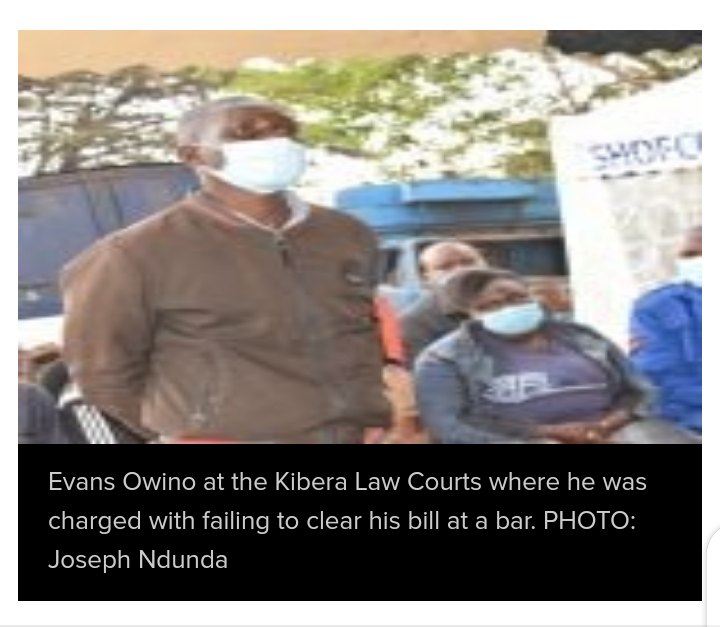 Evans Owino appeared in Kibera law court today for special case.evans fall victim of overspending with a lady she met in an entertainment joint.

The man failed to settle the debt incurred at Hacienda sports bar and grill in Westlands Nairobi.October 5th was a full day for Evans as he lied that he could settle the debt knowing that his pockets were dry.

He admitted he incurred the bill and was willing to pay but told the court he did not have the money.

The man is said to have walked alone in the afternoon and made an order of beer and krest and sat on a table.A woman saw him and was willing to give him company.

He started to order more drinks and even ordered grilled meat for himself and the woman.A suspicious barman asked him to pay but Evans insisted that there was no need to worry.

He was ordered to clear his bill for the second time and upon failing to do so, police were called in and Owino and his partner in crime were arrested.

The woman was released when she claimed that she was not the one making orders.Owino was released on a cash bail of ksh 10000.

Muturi Trashes DP Ruto’s Bottom-Up Model, Accuses Him Of Being Dishonest To Kenyans

Trending: MPs To Refund 2.7 Billion Given Is Illegal Allowances Or To Be Deducted From Their Salary