Matiang'i Takes Action After Three Die in One Police Station

By Soccer,AthletesNews.com (self meida writer) | 20 days 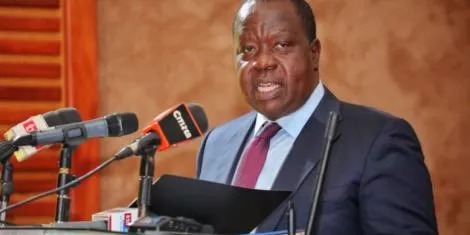 Interior CS Fred Matiang'i has taken charge of investigations against Rioma Police Station after an uproar over three unexplained deaths.

This comes two weeks after two people mysteriously died while in custody at the police station where another person had died towards the end of 2020.

Speaking during the opening of the Inspector General Conference on Monday, July 5, the CS noted that he had received a report he intends to act upon.

He further promised that all officers found culpable would face the full force of the law after investigations are concluded.

"I asked the Inspector General of Police last week to send the internal affairs team to a police station called Rioma where two people were killed.

"I have seen a report from the Inspector General about what is going on there and I want to commit to the public that we will take decisions in the direction that investigations are going to show us," stated Matiang'i.

"If there are any officers involved in making mistakes, they will, of course, face the full force of the law because we are here to ensure that we provide services to the people," he added.

One of the victims passed away on Monday, June 28 after his complaints fell on deaf ears. According to family members, Justus Nyangeso, 45, had complained of head and stomach pains.

In the same week, another individual passed away in mysterious circumstances prompting a protest from Kisii residents.

A 16-year-old student was also shot dead during a protest staged by the residents who were protesting the death of a boda boda operator due to aggravated police assault.

The police station has consistently been at the center of controversy and was in July 2020 torched over the death of a local businessman.

According to the protesters, the businessman was shot and killed by a police officer stationed in the area after they got into an argument over the use of a hand sanitizer.

Hundreds of protesters gathered and took to the streets, chanting anti-police slogans and demanding justice before they started heading towards the police station.

During his speech, Matiang'i also promised to address mental issues in the police service that has seen many take their complaints on Twitter.

Photos Of Diamond, Zari and Their Children In South Africa

Top 5 Footballers Who Married Their Fans

Lulu Hassan Left in Tears After This Unexpected Thing Happened