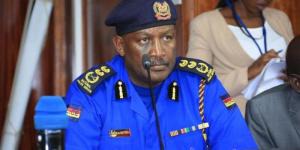 The National Police Service (NPS) on Sunday, October 17, issued a statement on the health of the Inspector General of police (IG), Hillary Mutyambai.

In a comment made on their social media handle, NPS dismissed claims that the police boss was unwell. NPS clarified that the news doing rounds on social media was fake.

Reports had surfaced on social media alleging that Mutyambai had been rushed to hospital after he reportedly collapsed on October 16. This, coupled with the fact that the IG had not run his weekly forum dubbed #EngageTheIG.

"NPS wishes to clarify and assure Kenyans that the IG is fine, healthy and on duty," read the statement.

He had been attending the 23rd Annual General Meeting for Eastern Africa Police Chiefs Cooperation Organization (EAPCCO) in Kinshasa, Democratic Republic of Congo, which ended on October 16

Also, part of the delegation was former Nairobi Regional Police Commander, and current Secretary of Security in the Ministry of Interior, Wilson Njenga.

In a post shared by the IG on October 17, he confirmed that the delegation jetted back to the country.

In May, the health of the police boss became a subject of public discussion as word went round that he had been taken ill at a city hospital.

According to the reports, Mutyambai had spent a week in the facility where he was attended to by doctors in the private wing of the health facility for an unknown medical condition. The police denied the claims, stating that he was "around and working."

They further alluded that the IG was only taking a temporary break from the office.