What A Thug Did In Kawangware That left Kenyans Talking 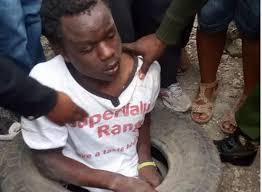 Police in Kawangware yesterday arrested Dennis Mwangeli Disi – a Kangemi resident suspected to be among two men who robbed and injured a man in Lavington.

The officers were acting in prompt response to a distress call raised by the victim of the robbery, following an increase of similar cases in the area.

In his report, the victim said that he had just delivered a laptop to a client at around 9.30pm yesterday and was waiting to hail a taxi along Riara Road in the well-heeled Lavington area, when two men approached atop a motorcycle.

The two attacked him and made away with his cell phone and a bag containing two laptops. During the robbery, the machete wielding thugs also left the victim with cuts on his fingers and stomach.

Officers from Muthangari police station caught up with Mwangeli at Stage Woria in Kawangware, as he was alighting from a motorbike. They noted he was carrying a bag and immediately ordered him to stop.

Mwangeli should have known better than flee from the swift law enforcers, who in no time cornered and arrested him.

In addition to the positive identification of the bag by his victim, Mwangeli was also found with a home-made gun tucked at his waist. Further investigations into the matter are in progress, as search for Mwingeli’s accomplice who escaped proceeds.

Waiguru's Entry To UDA Proves Difficult As She Is Set To Face Her Sworn Arch-Rival Ngirici. Opinion.

Photos and Videos From Zari Hassan's Visit To The Orphanage

Two Things That Every Campus Girl Should Avoid.